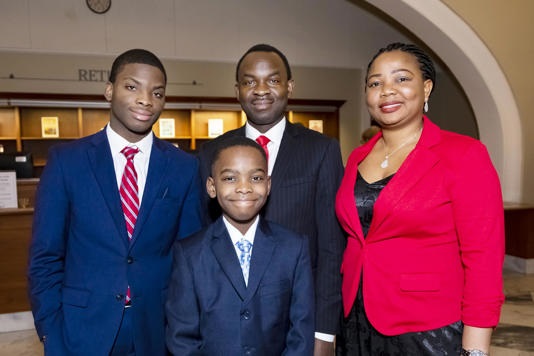 Chess prodigy Tanitoluwa “Tani” Adewumi and his family, who fled Nigeria in 2017 fearing attacks by the terror group Boko Haram, have officially been granted asylum in the United States, the family confirmed to CBS News Wednesday.
Tani, now 12, rose to fame at just 8-years-old, when he defeated 73 of the best chess players in his age group in New York to win his division in the state championship, and set a record in the process.
“We thank God for his mercy and the people of America for their kindness,” Kayode Adewumi, the boy’s father, told CBS News in a text message. Kayode indicated that Tani will now be able to compete internationally.
The Adewumi family after being officially granted asylum in the U.S. December 2022. / Credit: Kayode Adewumi
The Adewumi family after being officially granted asylum in the U.S. December 2022. / Credit: Kayode
In 2019, the family told CBS News they were living in a homeless shelter while trying to support Tani’s goals of becoming a grandmaster in the sport.
At 10 years old, Tani became the 28th-youngest chess player to become a national master in the U.S. Chess Federation. He has since become an International Chess Federation (FIDE) master, after winning the under-12 division of the North American Youth Chess Championship in 2021.

The post US grants asylum to 12-year-old Nigerian chess prodigy appeared first on The Sun Nigeria.

RELATED POSTS:  Southgate confirms Sterling will be involved against France