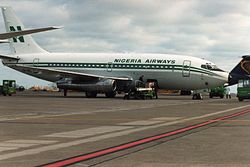 The Labour Party Presidential Candidate, Mr Peter Obi has hinted at what he will do when elected President in 2023 regarding bringing back the defunct Nigerian Airways under the purview of the government.

Mr Obi disclosed this in the United Kingdom when a group of elated Nigerians met him in a hotel lobby unexpectedly and sought to have an audience with him.

The former Anambra State Governor was flanked by Maazi Ezeoke of Njenje Media Group while on a strategic meeting in London before the Diaspora Nigerians ambushed him, seeking to have an audience and photo session with him.

Kafina Ajibola from Abuja, Mr Rwang David Chall and his family from Jos, Plateau State, were the Nigerian Nationals who bumped into him with so much elation and happiness.
Quizzed by Mr Rwang who is the President of the Plateau State Association in the United Kingdom, he queried if he would bring back Nigerian Airways when he gets elected as Nigeria’s President next year, Mr Obi categorically stated that he would not bring it back.

Continuing, he said:
“The reason why British airways are still functioning today is because it was no longer being run by the government. London Electricity, Telecom, Lollyd Bank, and Barclays Bank, were all sold and they are now efficiently managed. Nigeria needs to be more efficiently managed to make it productive for your future. So who would have an airline that would service Nigeria routes more effectively? But, if the government is going to be involved at all, it should be as part owner, where it would be a minority shareholder.

“Nigeria has a pool of talented entrepreneurs that if supported can venture into every endeavour of business and run it efficiently”, he concludes.