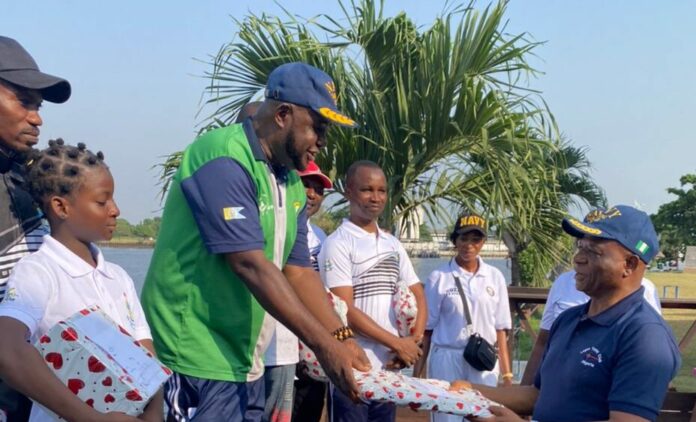 Speaking during the ceremony, the Flag Officer Commanding (FOC) Western Naval Command, Rear Admiral Yakubu Wambai, has promised to support the Navy Sailing Club in organising boat races for development of aquatic sport in the country.
Wambai who was represented by Commodore Duke Edem said he also wanted to see more active participation of junior officers as members of the Navy Sailing Club.
His word: “This will serve as a platform to acquaint the officers with swimming and other aquatic activities to improve their overall efficiency as soldiers and sports representatives during competitions.

“So, I implore the executive to have more patronage of junior officers now in the sailing club so that they can replace the veterans among us in future events.
“I promise to provide necessary support whenever the need arises, bearing in mind that the FOC Boat Race is an annual event for sailors to showcase their water sporting skills.”
Wambai explained the importance of sporting activities, within the Nigerian Navy noting that sports is a unifying factor and that the importance of sports could not be over-emphasised in the development and conditioning of the mind and body.
He called on the club to build on more facilities and bring in more innovation to the club and their activities in subsequent editions.
He said: “Furthermore, I advise the new excos to be diligent, transparent and prudent in managing the available resources at disposal while expecting maximum cooperation from the members during their one year tenure.

“The boat race was conducted according to laid down rules and I commend all the athletes that participated for the safety protocol which was observed.”
Earlier in his address, the Club’s Commodore, Simon Mayaki, said that the main objective of the competition was to develop a sailing culture and sea faring skills among members.
Mayaki, however, solicited for more support to equip the club and athletes in order for the sport to continue to grow in the country.
“Our boats and sails are outdated and we need new platforms and outboard engines to power our boats.
“In the last two years, the subvention from the Navy Headquarters that was given as assistance for the daily running of the club has been stopped.
“Please, if this subvention can be reverted, it will go a long way at sustaining the development which the club has achieved so far,” he said.
Also, the foundation Club’s Commodore, Rear Admiral Andrew Okoja (retired), said he was happy with the competition but noted that there was room for more improvements.
According to him, “The boat clubs are the social face of the maritime and Nigerian maritime is one of the largest in terms of cargo in Africa.
“So, we will like to grow the competition to involve participants from other sailing clubs to further give more publicity to water sports.”