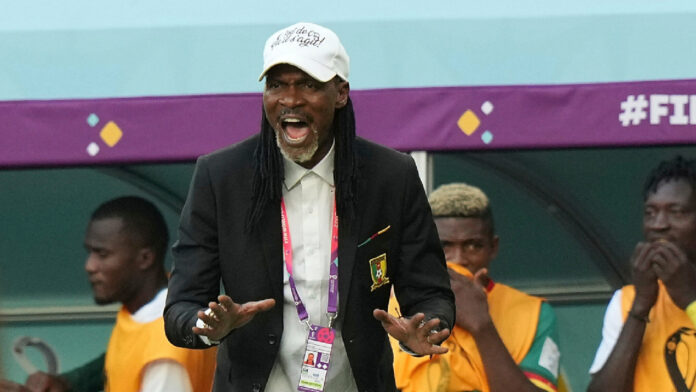 Song and Onana had a face-off before Cameroon’s World Cup 3-3 draw against Serbia on Monday.

Before the World Cup match, Onana was dropped from Cameroon’s starting XI to face Serbia due to his disagreement with Song over the team’s tactics.

Speaking on the development, Udeze insisted that Song can’t throw his best player out of the squad, adding that he should know his man management.

According to him, Song’s Senegal counterpart Aliou Cissé defended Chelsea goalkeeper Édouard Mendy when he made a mistake against the Netherlands.

“I believe there must have been an issue between Onana and the coach. Rigobert Song,” Udeze said on Brila FM.

“Song should have managed the situation. After the tournament, you may wish not to invite the player as the coach if you remain there or even as the FA President but not during the tournament.

“Cameroon had the chance to score, but they gave away this game. You can’t throw your best players out. The worst case scenario, you substitute the player. This is a tournament proper.

“When Aliou Cisse’s Senegal lost to the Netherlands and he defended his keeper, [Édouard] Mendy, he knew what he was doing.

“Cisse knows how to manage players. He’s a good man manager. His keeper made a mistake, but he defended him. And even Kalidou Koulibaly against the Netherlands. And the next game [against Qatar], they won.

“Unless the behaviour of the player is so bad, you have to know your man management.”