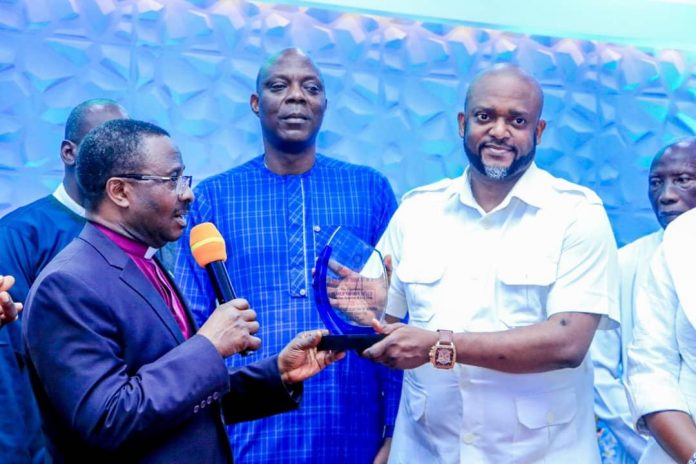 In recognition of his stand on equity and fair treatment of Christians in the state as well as his friendly disposition towards the Christian religion, the Christian Association of Nigeria (CAN) has conferred the “Friend of the Church” award on Kogi State governor, Yahaya Bello, Njenje Media News reports.

The CAN national president, Rev Samson Ayokunle during the official dedication of the Government House Chapel built by the Kogi governor in July 2019 after 28 years of the existence of the State Government House, thanked the governor for his step to bring justice and inclusiveness adding that it was only leaders who have the spirit of God that could take the bold step to build a house for God

Rev Ayokunle urged the federal and other state governments to emulate the Kogi State governor’s approach in ensuring fairness and balance in the affairs of governance between every religious sect in the state, alluding that such steps have guaranteed peace in the state and for his government

He said, “In the atmosphere of justice and mutual respect prosperity would be guaranteed  and the country being a plural nation, it is our duty that while practicing democracy we apply native sense taking into cognizance our plurality.”

Governor Bello who was represented by His deputy, Edward Onoja, said he could not understand the dynamics behind why previous administrations refused to build a befitting worship center for the Christians within the premises of the Government House, noting that because of the plural nature of the state such action was wrong.

He stated that it was quite surprising that those who belonged to a much more enlightened generation have decided to politicize issues of religion as such parochial thinking was antithetical to the stride of any generation or society to make any progress.

Governor Bello noted that when he assumed office, he saw the absence of a worship center for Christians as an error which his administration deliberately decided to correct, hence the dedication of the Chapel was quite significant for his administration.

He added that the significance of the Chapel being dedicated would surpass its size with such compelling messages of the binding responsibility of equity on leaders, equity, fairness and justice as the bedrock of an egalitarian society, inclusivity and equal access to governance are the inevitable rights of every citizens and that affirmative action is for every section of the populace, as leaders must always take the step to balance the scales.

The governor asserted that his government had taken such affirmative action beyond just religion but in other aspect of the society pertinent of which was governance and the inclusion of women in governance as made evident in its administration’s appointive and elective positions.

Governor Bello lauded the CAN president for being a veritable source of encouragement as he understood just like himself that the very soul of the nation was a stake whenever inequity and inequality was allowed to thrive reiterating that he was opened to counsel from the Christian leader at all times.