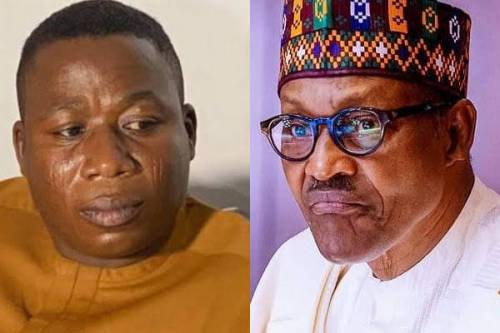 The National Leader of Afenifere, Ayo Adebanjo says the Nigerian government has no right to seek the extradition of Yoruba Nation agitator, Sunday Adeyemo, aka Sunday from Benin Republic.

He also said President Muhammadu Buhari cannot command the kind of crowd Igboho commands even though the Nigerian leader hires crowds of people to make him seem popular.

A few weeks after Ighoho was declared “wanted” by the Department of State Services (DSS), Benin Republic’s security forces arrested him in Cotonou while he was trying to flee to Germany.

Nigerian authorities have been pushing for the extradition of the Yoruba nation agitator from the Francophone country.

On Thursday, in a chat with Arise TV, Adebanjo added his voice to the stream of reactions.

He described Igboho as a “political prisoner”, and said the Nigerian government has “no right” to seek his extradition.

The 93-year-old Afenifere leader said Nigerian authorities are only terrified of Igboho’s popularity, saying “the-power-that-be wants to kill him because he’s leading a popular revolt”.

He added, “Buhari may depend on chariots and everything, but we have God. And we call on our God to deal with Buhari.”

“He [Igboho] is a political refugee. He didn’t commit any crime here. He didn’t waylay or kill anybody. He didn’t run away from anybody after committing a crime. He ran for his life because the-power-that-be wants to kill him because of his agitation. Because he’s leading a popular revolt,” Adebanjo said.

RELATED POSTS:  "I am not evading Justice''- Maina speaks from hospital bed

“You’re looking for somebody’s life, and you ask him to come and surrender himself. Who will do that? He has muzzled everybody: the press can’t talk, and there is a limit to questions that broadcasters can ask now without them closing the station. Keeping everybody quiet. But I tell you, Buhari may depend on chariots and everything, but we have God. And we call on our God to deal with Buhari. Because we are helpless, and he has all the ammunition of power.”