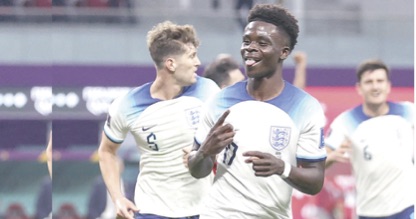 Bukayo Saka is one of the best young players in the world and will be a huge threat to the United States’ hopes when they meet England, according to goalkeeper Matt Turner, Njenje Media News reports.

The USA began their World Cup campaign with a 1-1 draw against Wales on Monday, and they will face a stern test of their Group B credentials against Gareth Southgate’s team next time out.

Turner has seen Saka’s talents at close quarters since joining Arsenal from the New England Revolution in June, and he knows the USA must keep a close eye on the tricky winger if they are to stand a chance on Friday.

“I think it’s pretty clear – he’s one of the young stars of world football,” Turner said of Saka on Wednesday.

“He’s a top, top player and I think you don’t need me to tell anybody on our team how much of a threat that he poses in the game.

“He’s scoring goals in a variety of ways. He’s really developed and mature.

“He’s gotten stronger from what I understand. I’ve only worked with him for a few months.

“I’m looking forward to playing against familiar faces. He’s a really, really good player who can change any game that he takes part in.”

Saka’s double came after a fine opening goal from Jude Bellingham on Monday, which represented the first time England have had two players aged 21 or younger score in the same World Cup match.

No England player has scored in consecutive appearances in the competition when aged 21 or younger, with Michael Owen the youngest to do so at 22 years old in 2002.

6 – England recorded their biggest ever victory in their opening match at a major tournament (World Cup/EUROs) and scored six goals in a major tournament game for the only the second time in their history, also doing so against Panama at World Cup 2018 (6-1). Assured. pic.twitter.com/OD0oNRxU5S