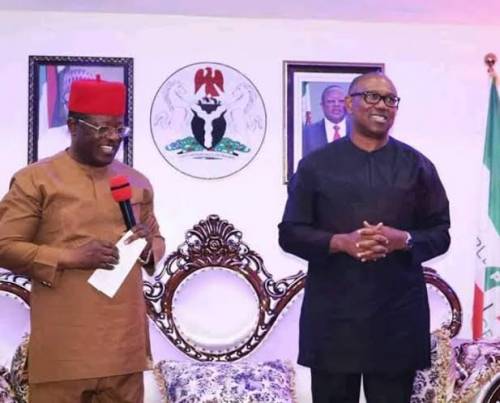 Governor David Umahi has declared that the people of Ebonyi State will not vote for Labour Party nor its presidential candidate, Peter Obi, in the forthcoming 2023 general elections.

Umahi said instead of voting for Peter Obi’s Labour Party, the people would rather vote for the candidate of the All Progressives Congress, Bola Tinubu.

The governor, who spoke after the State Executive Council meeting at the new Government House, however, threatened that he would sack political appointees whose local government areas record poor registration of voters.

SaharaReporters had reported that the governor who contested the presidential ticket of the ruling APC and lost to former Lagos State Governor, Tinubu, scored only 38 votes believed to have come from Ebonyi State delegates.

Umahi had accused political leaders and South-East delegates of selling out their votes.

He also accused the president general of Ohanaeze Ndigbo of not being sincere to the touted South-East presidency project, which he said was just, fair and desirable for peace in the country.

Umahi, who had vowed that his state would never join Biafra, noted that the only bargaining power was to ensure that Ebonyi people had their Permanent Voter Cards ready for the forthcoming general elections.

He said, “Ebonyi State can never support Labour Party and if anybody questions the rationale behind that, let him ask the person whether they supported the Igbo Presidential ambition during the APC Primaries.”

He added that his major focus now was the “Ebonyi agenda” and he had no business with Ohanaeze.

The governor also appointed a new Head of Service, Dr. Rita Mary Okoro, and five new Commissioners to fill the vacant positions created in the cabinet as a result of the resignations by those seeking elective positions in the 2023 general elections.