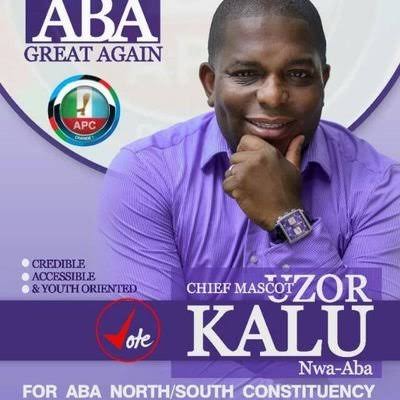 The Independent National Electoral Commission had declared the PDP candidate, Mr. Chimaobi Ebisike winner of the poll, beating Mascot Kalu, the brother of Senate Chief Whip, Orji Uzor Kalu of the APC and other contestants to the polls.

According to INEC, Ebisike polled 10,322 votes to defeat the All Progressives Congress, APC, candidate, Mascot Uzor Kalu who got 3,674 votes.

In a Press Statement, the All Progressives Congress Candidate bemoaned what he called the level of thuggery, violence and rigging associated with the polls but called for a reform of the electoral laws.

He however said he won’t initiate litigation against the result to enable the winner concentrate on the new office.

Njenje Media News has a copy of the Press Release, please read below:

The March  27, 2021 Aba North  and Aba South Federal Constituency by-election  is over, and Peoples  Democratic Party (PDP)  has been declared winner by the Independent National Electoral Committee (INEC), we  appeal to our members to accept the outcome of the elections in good faith while appreciating them for making the Party stronger in Abia.

While the opposition wanted the election at all cost , we chose life over blood shed and therefore won lives and lost the polls. To us, that was a greater victory .

The level of  thuggery, violence and rigging that occurred in the election calls for a deeper review of  our electoral laws .  Every country is peculiar to it’s people , all Nigerian  should support the electoral laws that is being amended  as it would assist us in getting our democracy strengthened. The electoral laws as it is renders the security agencies with arms weak in the face of violence at the polls  and therefore needs a revisit . Granted that the armless police should be inside the polling units, the armed should be within fifty meters away from the units .

Our opponents flooded the city with thugs numbering over 20, 000. Traders were threatened with text messages to keep away or lose their lives .

My campaign officers  and our Party agents were kidnapped , even the Resident Electoral Commission (REC) , Prof Joseph  Iloh was manhandled by thugs  at  the Aba polytechnics.

We campaigned vigorously and Aba people were expectant of improvement from what late Ossy Prestige of blessed memory did . My only concern is that Aba people lost.  They lost a quality representation and chance to have added infrastructures in Aba .

We were winning in more than 400 polling units and they kept using thugs to harass the INEC officials and scare our voters . Our voters ran for their lives . In a city with over 497,000 voting strength, less than 15,000 votes were recorded in the entire election.

I commend the INEC and  security agents who were overwhelmed and I congratulate them  for their services and the risk they took to protect the citizens.

I also thank the  National Chairman of the Caretaker Extraordinary Committee,  His Excellency,  Gov.Mai Mala Buni , Aba North and South Party Chairmen and all our party faithfuls for their support in the election.

Even though we have enough evidence to reclaim our mandate , we won’t be going to the court . This is to allow the declared winner to concentrate and provide good representation and infrastructure to the good people of Aba.

Once again I thank the Aba people for coming out en masse to vote for the APC and I congratulate the winner , Chimaobi Ebisike and the PDP,  not because they won but because it’s gentleman to do so .