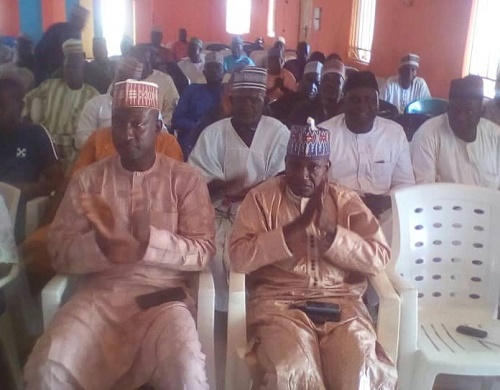 The caretaker executives ofthe All Progressives Congress (APC) in Hong local government area of Adamawa State have cried out over an alleged plan by powerful individuals to impose officials during the local government congress of the party scheduled for Saturday, September 4.

At a meeting in Yola attended by the local government and ward leaders of the party in Hong LGA, the caucus asserted that otherwise respected individuals are parading powers that the party’s constitution does not confer on them and are bent on determining who becomes what in the party Hong.

Hong is the home local government area of the present and immediate past Secretary to the Government of the Federation (SGF), Boss Mustapha and Babachir Lawal.

Among the Caucus members at the Yola meeting were APC Hong Local Government Caretaker Committee chairman, Hon. Bako Waliya and his colleagues in the party leadership at the LG level as well as chairmen of the party in the 12 wards of the LGA and other stakeholders.

The APC Hong LG Caretaker Committee Chairman Bako Waliya said it had come to the notice of the local government Caucus that some members of the party who should actually be playing the role of father to all, had arrogated to themselves the powers to foist a pre-selected list of officials on the local government area as an outcome of an electoral process that has not taken place.

He said: “In the last few days, as we began the countdown to the day of the congress, we have become aware of certain moves by some of our party men and women, respected ones at that, whose only and consuming desire is to undermine the entire local government area leadership machinery of our party by seeking to foist on us a predetermined and already selected list of party officials for the local government area.

Warning that due process must be followed to avoid chaos and litigations after the election, the Hong APC caretaker chairman said: “The constitution of the APC has laid down provisions of who possesses the powers and authority to make or take certain decision in the party and advised any individual or group, including our esteemed elders caucus.”

The Fulani Have Been Made To Believe All Of Nigeria Belongs...