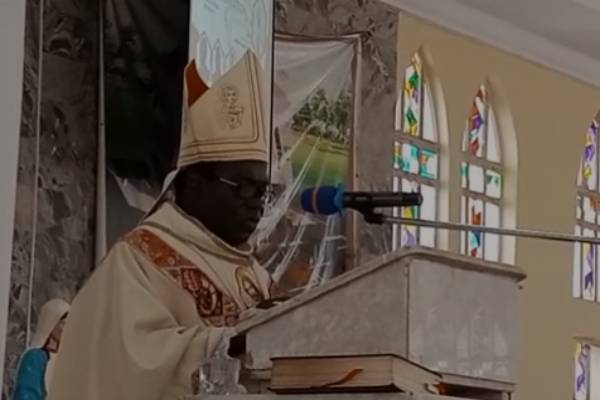 Bishop of Sokoto Catholic Diocese, Mathew Hassan Kukah has called on Christians in Nigeria to rise up and live up to the expectation of their callings as followers of Christ, Njenje Media News reports.

The Bishop said the persistent of forces of darkness of banditry, Boko Haram, kidnap for ransom and other security challenges that have rendered many homeless and caused the death of several others is a wake up call for all Christians to disperse the forces of darkness in the nation.

Bishop Kulah made this call shortly after the ordination Mass for the newly ordained five priest of the Sokoto Catholic Diocese held at the Holy Family Catholic Cathedral in Sokoto.

He described the security challenges facing the country as the forces of darkness which is not in.line with the light of Christ

He said though the federal government is not willing to mention and shame the sponsor of Boko Haram, but citizens are now aware that sponsors of Boko Haram are Nigerian citizens working to destabilize the nation.

The Bishop said it is the responsibility of government through the security agencies to ensure no trouble maker using whatever platform to destroy the nation is allow to have his way.

He said it more worrisome to see all these happening when the nation is not at war with any nation or fighting a civil war.

The Bishop expressed satisfaction that despite the cloud of darkness in the nation, the church is moving forward and souls are harvested to the vineyard of the Lord Jesus Christ.

Digital Marketing Is The Future Of Online Businesses — Digipreneur, Philipp...