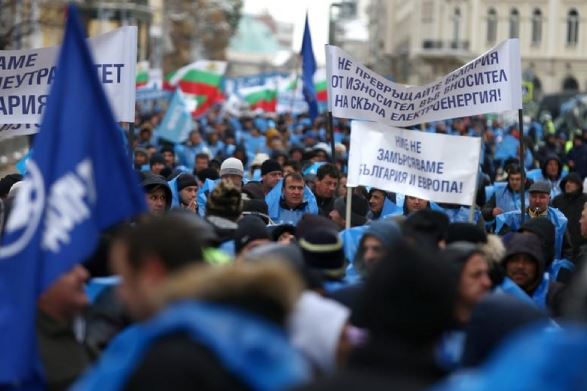 Over 1,000 miners and workers from Bulgaria’s largest coal-fired power plant on Wednesday marched through Sofia to demand that the government protect their employment and support their industry, Njenje Media News reports.

Despite a European Union campaign to decarbonise the bloc’s economy by 2050, demonstrators demanded that the government assure it would not rush to close mines and power units at the Maritsa East lignite coal complex in southern Bulgaria.

The interim administration said on Friday that it plans to propose its EU funding package to Brussels. It will stick to its goal of shutting down coal-fired power facilities by 2038 or 2040, which is substantially in accordance with miners’ requests.

Environmentalists have called for the polluting plants to be shut down by 2030, pushing Bulgaria to focus on renewable energy and creating new jobs in coal-mining areas.

Protesters claim that shutting down the facilities, which generates 40% of Bulgaria’s electricity, will result in power shortages and higher energy expenses.

The Maritsa East complex employs 10,000 people, and its lignite coal seams are high in Sulphur, which is responsible for poor air quality and respiratory problems.

The complex, according to trade unions, offers jobs for more than 100,000 people in the European Union’s poorest member state, and they have vowed to keep up the pressure on the government that will be elected following a general election on November 14.