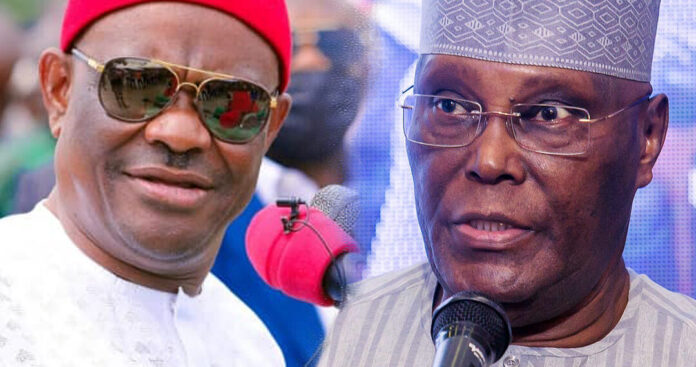 Aniagwu said this during an interview on Nigerian Television Authority (NTA), on Friday.
The Peoples Democratic Party (PDP) has been in crisis since the election of former Vice-President Atiku Abubakar as the standard bearer of the party.

It got worse when Wike, whom many thought would be chosen as the party’s vice-presidential candidate, was ignored by Atiku for feanyi Okowa, governor of Delta
Speaking on the crisis rocking the party, Aniagwu said Wike cannot compare the zoning formular in the PDP with that of the ruling All Progressives Congress (APC) because the last person to become president in the party, Goodluck Jonathan, was from the south.

“In 2015, let’s not forget, Amaechi was leaving office. Amaechi is from the same place as Wike. You didn’t say let’s us move to the waterside. What Wike said then that I recall was that you need to, first of all, have the power before you begin to respect zoning. That the party in Rivers was not in power because Amaechi has moved to APC. That PDP cannot be talking about zoning when they were not in power in Rivers,” Aniagwu said.

“In Nigeria today, PDP is not in power. Besides, the last president from the party was Goodluck Jonathan from the south. Are you using Buhari of APC to zone in PDP when we are operating different constitutions? Those are some of the issues that I like my brother to answer.”

“But we are pleading with them. The reason why we are pleading is that Atiku wants to run with everybody on board. What you are demanding what is the problem of this timeline. In six months, this election would have been done and dusted and then everything you want to change can change. You will say in one meeting you are not talking about appointment but you are talking about elected people. In one meeting, you will sit down you will balkanise your constitution, you will rape your constitution and you want to be the doctor to perform a surgery.”