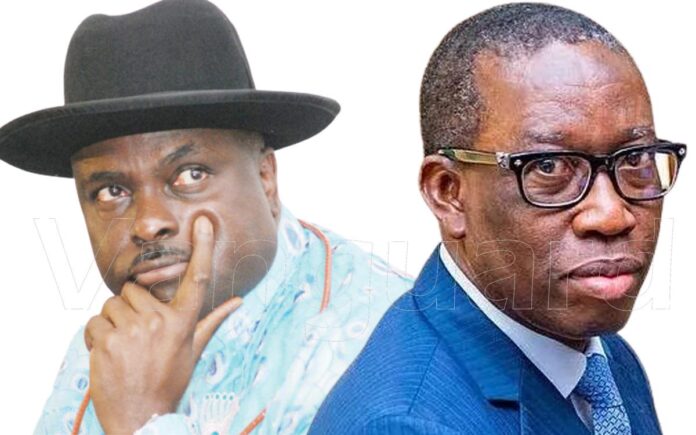 Did Governor Ifeanyi Okowa, tell it as it is when he said weeks before the just-concluded Peoples Democratic Party, PDP, primaries in Delta State that the famed Ibori PDP political family commanded by a former governor of the state, Chief James Ibori,  was still intact and the noticeable spectacles were all politics?   In his words: “The Ibori family as you call it is still intact, the PDP family in Delta State is still intact, and whatever you are seeing at the moment is just politics”.

To properly interrogate the matter, it is pertinent to understand that Ibori had a favorite candidate for the party’s 2023 governorship ticket, whom Okowa did not give backing for palpable reason. The governor also had a diversionary strategy which his political mentor could not put his finger on.

However, a PDP leader from Delta South senatorial district, Chief Joseph Otumara, who tried to diagnose the opinionated disorder, earlier in April, stated that close to every election year in the state, the party usually faced turbulent times in nominating its governorship standard- bearers.

”I have discovered that close to this period, governors find themselves in a tough position, even during the period of ex-governor, Dr. Emmanuel Uduaghan, it was not an easy thing, and we are seeing a second one in this new political dispensation.

“The truth is that you cannot arrive at a compromise, which everybody is agreeing on a particular person, you must go to the field to test your popularity.

“And once that is done, any candidate that emerges will have the ears of every PDP member. Politics is about number, voting, scheming, calculation, secret deal and all that and they can be arranged at the end of the day”, the senior politician adumbrated.

Okowa’s claim that the machinations were all politics could be discerned from Otumara’s illumination but what remained to be seen after the leaders tested their popularity in the May 25 governorship primary that threw up the Speaker, Rt. Hon Sheriff Oborevwori as the party’s gubernatorial standard-bearer, is the ensuing backslapping and merriment.

Sometime in May 2021, the governor observing the scramble by leaders and stakeholders to produce his successor, cautioned: “We are politicians and politics will have to be played. I can see that a lot has been on in our dear state, especially the scramble on who will replace Dr. Ifeanyi Okowa come 2023.”

RELATED POSTS:  2023: I won’t run for president on any other party – Moghalu

“Unfortunately, some are not even patient, they started their campaigns in the first three months of my second term in office.

“I want to charge our leaders and people to be cautious because politics is such that if you do not read it rightly, you will directly throw your people into fire.”

When it finally came to brass-tacks in 2022, Okowa who had understudied the people and understood that politics is a game of power devised elusive and democratic yet crafty tactics to achieve his purpose.

He enchanted challengers that sought to trap him through direct mode by undertaking ultimate power using knock-on technique. As a rule in the power game, you must keep you intentions obscured, so Okowa disguised his targets and swung smokescreens to distract competitors.

What bamboozled many was his hovering and not landing all the period he was expected to roost.

Though the governor and Ibori did not strike any known compromise on governorship candidate before the last primary, when a similar scenario emanated 2006 in the Ibori political family, some top members, including Okowa and Deputy Senate President and current All Progressives Congress, APC gubernatorial candidate in the state, Senator Ovie Omo-Agege tackled Ibori on his choice of successor until the straddling tension was nipped.

The Ibori political family cringed again in 2014 when Uduaghan picked an outsider, the late Tony Obuh, as his preferred gubernatorial candidate until forces prevailed on him to dump him for Olorogun David Edevbie, who lost in 2014 to Okowa.

The family was not torn apart but segregated into Uduaghan and Okowa camps till after the primaries when the members reunited.

In the last primary, some of the  unsuccessful and successful aspirants, including Hon Ejaife Odebala and Oborevwori, are all members of the Ibori PDP family.

Chief Political Strategist to the Government, Dr. Festus Okubor, explained to  Saturday Vanguard: “Yes, the PDP political family founded from the days of Grassroots Democratic Movement, GDM, is very intact. The family is made of self-willed and self-elected politicians driven by an undying determination for the continued betterment of our state, Delta.”

“As politicians, we are bound to have differing opinions on issues and when not able to agree, a division is called and the majority position becomes the position of the group and we soldier on from there.

“That was what happened in the primaries and the leader of the party, having ensured a remarkably free and fair primaries for every member to express his position, the majority position on all offices have been made known and as usual, we soldier on from there. You will note the peaceful nature of the primaries.

”That was evidence that horns were not locked in any fight anywhere. It was a family affair. The openness, fairness and transparency of the primaries also make you not hear of protestations and petitions.  Everyone was a winner in the true sense of political family affairs. Edevbie was not the issue. The issue was for us to choose a candidate and that done, we were all successful, including Edevbie.”

On allegation that the governor betrayed Ibori, he chuckled: “Betray? I do not understand, Sheriff Oborevwori is a member of Ibori political family. And he is the choice of the entrusted delegates and now the party’s candidate.  It was a family affair and there was no one to be betrayed. Okowa did no wrong.”

Contrary to Okubor’s position, a member of the Ibori family who did not deflate the claim that the collection was intact, maintained that the governor stunned Ibori, who is understandably livid at Edevbie’s rejection.

Since Oborevwori emerged as the party’s 2023 candidate, Ibori has not publicly passed on good wishes to him or Okowa, the party leader and top shot of the Ibori political family for the fruitful exercise.

An informed source, who hinted Saturday Vanguard that Okowa and Ibori only met after the Delta primaries at Abuja and there was no conversation on Oborevwori’s emergence between then, added: “Okowa still hold Ibori in awe even with the outcome of the governorship primaries and would continue to maintain the respect, characteristic of his level headed temperament.”

An ally in whom Ibori is well-pleased and the party’s Delta Central senatorial candidate, Chief Ighoyota Amori, has, however, by his conduct showed the Ibori family was intact as Okowa asserted. He was right there at Government House Chapel, Asaba with Okowa, Oborevwori and others to thank God immediately after the May 25 governorship primary.

It is possible that after the politics of running mate to the Presidential Candidate of the party, Alhaji Abubakar Atiku, which both Ibori and Okowa are thickly involved in Abuja,  but with divergent sentiments, the twosome who know that politics is game of power will return home to put Ibori house in order for 2023.

Dr. Okubor dismissed such an unpleasant development, saying: “Ibori is a foremost PDP leader. He is very large-hearted and a team leader. He will work assiduously for the party’s victory at all elections.  In the family, we have great disciplined minds and overwhelming pan-Delta structure to overwhelm any opponent or combination of opponents.”