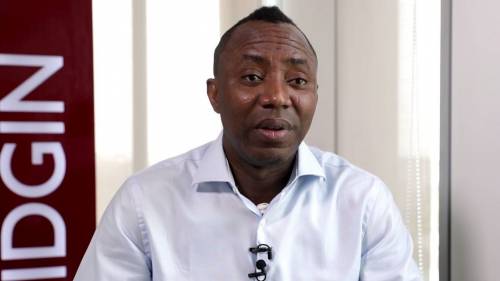 Omoyele Sowore has accused Ekiti State Governor, Kayode Fayemi, and other members of the ruling All Progressives Congress (APC) of destroying the principles of democracy with vote-buying during the Ekiti governorship election on Saturday.

Sowore, who is the presidential candidate of the African Action Congress (AAC), on Sunday said Fayemi who paraded himself as a ‘pro democracy’ activist was the mastermind of vote-buying that led to the massive victory recorded by the APC in the election.

He tweeted, “Gov. @kfayemi of the All Progressives Congress @OfficialAPCNg made his name as a “pro democracy” activist, by yesterday he and other members of his party destroyed “Democracy” with paper money! #WeCantContinueLikeThis.”
SaharaReporters earlier reported that the Independent National Electoral Commission declared the candidate of the APC, Biodun Oyebanji, as the winner of the governorship election.

Gov. @kfayemi of the All Progressives Congress @OfficialAPCNg made his name as a âpro democracyâ activist, by yesterday he and other members of his party destroyed âDemocracyâ with paper money! #WeCantContinueLikeThis pic.twitter.com/HFoxRP5gnI

The Returning Officer for the election, Prof Kayode Adebowale, who is the Vice-Chancellor of the University of Ibadan, announced the results.
Adebowale said, “Oyebanji, having scored the highest number of votes is hereby declared the winner and returned elected as the governor-elect of Ekiti State.”

While the agent of SDP, Owoseeni Ajayi, did not sign the forms for the votes cast, the agent of the ADP, said, “Instead of having polling centres, what we have in Ekiti are vote-buying centres”.