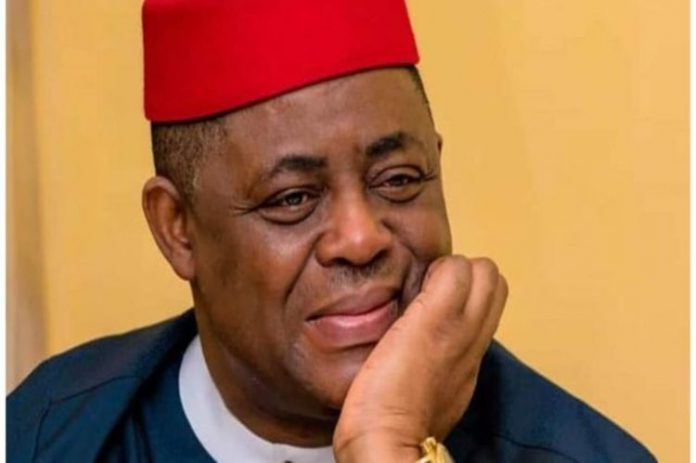 A former Federal Minister of Aviation, Femi Fani Kayode has penned some notes on the recent organ harvesting scandal in which the former Deputy Senate President, Senator Ike Ekweremadu is embroiled as was monitored by NjenjeNewsMedia. I have done my research on this matter. As I said from the outset, I cannot and will not condemn my friend and brother Senator Ike Ekweremadu and his beautiful wife unless I see the evidence of their wrongdoing or they are convicted by a court of law.

I am now convinced that there is NO evidence and that they will NOT be convicted.

There is also a distinct possibility that the charges may eventually be dropped or thrown out by the court if the British really want to play it fairly.

I believe that the London Metropolitan Police have acted hastily and in error or that they are simply behaving in a typically racist manner all in an attempt to demonise and stigmatise a Nigerian public figure and Nigerians generally even though the evidence  before them cannot possibly justify the charge or a conviction.

When I looked into the matter and considered all the facts, including the young man David Nwaminyi’s own testimony which was published on his Facebook page a few hours ago, I asked myself the following questions.

How can this man be so wicked and cruel and how can he be so ready, willing and able repay good with evil?

The Ekweremadus needed help and instead of giving it to them as promised he sought to take advantage of them, milk them dry, endanger the life of their ailing daughter, send them to jail and utterly destroy them.

Was David not sent to the Ekweremadu family by Lucifer?

Is he not the biblical “son of perdition” who takes pleasure in the destruction and misery of others?

Is he not the quintessential sadist?

Is he not a beast in human flesh?

I know Senator Ekweremadu quite well. He is a deeply courageous man and his greatest concern and fear right now will not be for his own safety or future but rather for the welfare of his  daughter and the travails of his dear wife.

That is the measure of man that he is: he always puts his family first.

And when I consider what this monster called David is doing to them I ask myself, what on earth have they done to deserve all this?

A couple have a sick child in a foreign hospital. They needed and asked for your help. You volunteered to donate one of your kidneys to their daughter so she could live.

You were well paid for this purpose. You were of age. You were not underage or a minor.  You gave your consent.

Your visa was lawfully and legitimately processed and your purpose for going to the U.K. was disclosed in the visa application.

You were not smuggled across international boarders secretly or illegally, against your will or treated like a slave but rather you were flown on a plane and you entered the U.K. lawfully and willingly.

Nothing was hidden. Nothing was done in the darkness. There were no hidden, ignoble, macabre or sinister motives.

You were taken abroad for the sole purpose of donating one of your kidneys and you were given the best treatment by the Ekweremadu’s (by your own admission) and at their hospital of choice.

Instead of doing the right and honorable thing and following through on your own part of the deal by helping the young lady or instead of simply saying that you have changed your mind and have elected not to donate your kidney any longer, satan entered your body, spirit and soul, you got other ideas, you sought to make more money and you started plotting and conceiving evil against those who were depending on you.

You resolved to attempt to send the Ekweremadus to jail for no just cause, far away from home and in a foreign land simply because they were desperate, they asked you for help, they trusted you and they paid you.

You have destroyed their reputation and you now want their daughter to die from stress and the inability to get someone else to donate a kidney to her.

You wish to destroy three lives and an entire family just so you can gain political asylum, stay in the U.K. and live off the state.

Apart from being motivated by your crass and primitive greed, it is possible that you are also being used by some unscrupulous elements and Senator Ekweremadu’s political enemies but whichever it is, you alone will bear the consequences of your wicked and callous actions both in this life and in the next.

It can never be well with you. You will suffer the consequences of your wickedness and you will be exposed for what you are.

You are not 15 but 21. You consented to this course of action. You offered to help them but now you are hell- bent on destroying them.

I and millions of other Nigerians  condemn and despise you.

As for the Ekweremadus they will come out of this  better and stronger and rise even higher.

Their daughter will not die but live  to the glory of God and both the Senator and his wife shall return to Nigeria in victory and in glory.

You on the other hand will fail in your evil quest, you will be eventually deported and you shall return in shame.

And when you do you will face the full wrath of the Nigerian people and legal system. It is only a question of time.

I assure you of this.

When one of our own is falsely accused in a foreign land we ought to rally around him or her. And Ekweremadu and his wife are our own.

We may not agree with them on everything but they are part and parcel of us as a people and we must not abandon or condemn them without good reason.

Permit me to end this contribution with a word for David the Wicked:

You have no idea how much damage you gave done to yourself, your country and your life with this evil course of action. Surely you shall reap what you have sown.

You are nothing but a wicked, evil and cruel little man.

The God of Heaven who sees and knows all shall judge you.

FFK is a former Minister of Aviation, wrote from Abuja