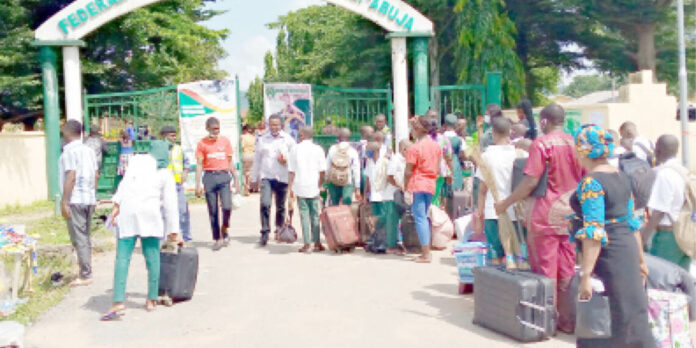 The Chairman, Parent Teachers Association (PTA), Suleiman Idajili, said the decision followed a terrorist attack on a nearby village on Sunday morning.

The management of the Federal Government College, Kwali, Abuja, has asked parents to evacuate their wards from the school over the fear of attack by terrorists.

This has caused panic among the management, staff, students and parents of the school.

The school management asked parents to evacuate their wards following an attack in a nearby village “that shares a fence” with the school.

The students who were scheduled to conclude their third term examination on Tuesday have now been sent home.

A parent who evacuated his wards and asked not to be named told PREMIUM TIMES that the school reached out to parents.

“I just picked them up from Giri junction,” he said. “The house master called to inform us,” the parent said.

“Meanwhile, the examination is still ongoing. Some students are still stranded, waiting for their parents,” he added.

The Chairman, Parent Teachers Association (PTA) of the school, Suleiman Idajili, in a telephone interview with PREMIUM TIMES, said the directive followed an attack on a nearby village on Sunday morning.

He said terrorists attacked the village sharing a fence with the school and abducted a man and his wife. He said the terrorists later left without the wife.

He added that the prompt response of the security personnel in the school protected it from the terrorists.

He said the school management directed parents to evacuate their wards by Monday, but that those near the school opted to pick up their wards on Sunday.

The decision, he said, was approved by officials of the Federal Ministry of Education who he disclosed visited the school earlier on Sunday.

He said[b]: “Officially, we say they should all come tomorrow (Monday). But those that live around want to pick their children today. And many of them came today.”

“So, that was why we had to take that action because we don’t know their next plan.”[/b]

Efforts to speak to the Director of Press at the education ministry, Ben Goong, were unsuccessful on Sunday as he neither picked calls to his line nor replied a message sent to him.

Meanwhile, Mr Idajili has assured parents that the security operatives are on ground to guide against any intrusion by attackers.

He said: “We have very tight security to secure those whose parents didn’t come to pick them up tonight. The army is involved. The police are involved; secret police and ocal vigilantes are all involved.”

When contacted, the FCT police spokesperson, Adeh Josephine, said she was unaware of such an incident. She promised to make enquiries and get back to our reporter. She was, however, yet to do so as of the time of filing this report.

The Divisional Police Officer (DPO), Kwali Division, did not respond to calls by our reporter.

Since the infamous abduction of over 276 girls in Chibok, Borno State, Nigeria has witnessed at least 28 incidents of school attacks in the country.