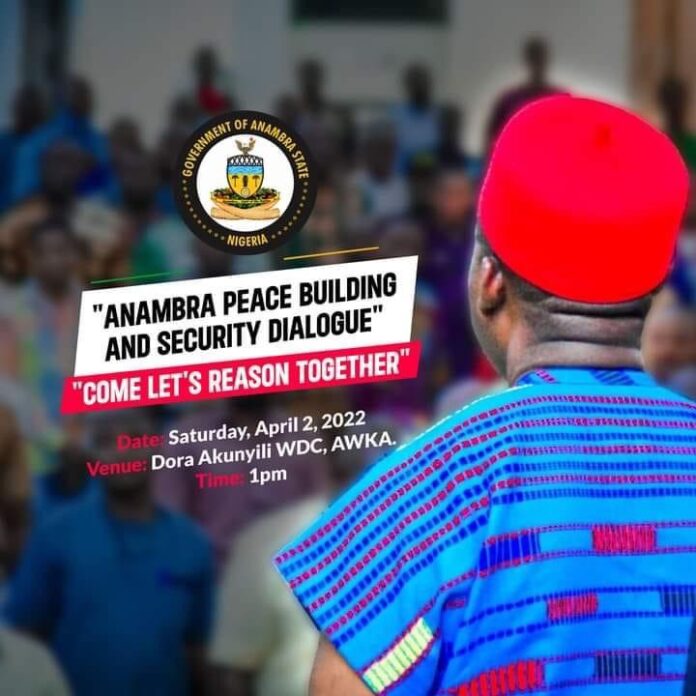 Anambra State Government has initiated moves for a more peaceful and prosperous homeland in the state and the South East region.

Soludo Assures Of The Release Of Nnamdi Kanu, End Monday Sit-At-Home During Onitsha Clean Up Tour With Onitsha Based Prophet, Chukwuemeka Odumeje.

This started with a one day peace building and security dialogue convened at the instance of the Governor of Anambra State, Professor Chukwuma Soludo.

The discussion became imperative out of growing concern on the spate of insecurity in Igbo land.

Stakeholders in the state including Security Chiefs, Religious Leaders, Community Leaders, among others, converged on Professor Dora Akunyili Women’s Development Center, Awka to make a clarion call for the release of Mazi Nnamdi Kanu, count the losses and move on.

Reading out aJoint Statement by the Government of Anambra State and the Joint Body of South East Council of Traditional Rulers, Bishops and Archbishops on the State of Insecurity in the Igbo Homesteads, the Chairman of Anambra state and South East Traditional Rulers’ Council, Igwe Nnaemeka Achebe who hinted that the discussion started long ago, revealed that the IPOB has long canceled the sit at home which has unfortunately become counter-productive.

While appreciating the joint statement, Governor Soludo who said that Anambra, South East and Nigeria are all in a regrettable state of insecurity, explained that the spirit of Anambra is different from bloodshed and wanton violence, canvassing for an end to all forms of violent agitations as the dialogue is ongoing.

The Governor pointed out that it is time to differently and seriously engage with the good, the bad and the ugly without discrimination to entrench peace and security in the land.

He supported the position of the joint body and hopefully with Governors of the South East as well as every Nigerian for Nnamdi Kanu to recieve expeditious justice, because according to him, justice delayed is justice denied, saying that the monday sit at home is not a way to protest and cautioned that anybody enforcing the continous sit at home will henceforth be regarded as a criminal.