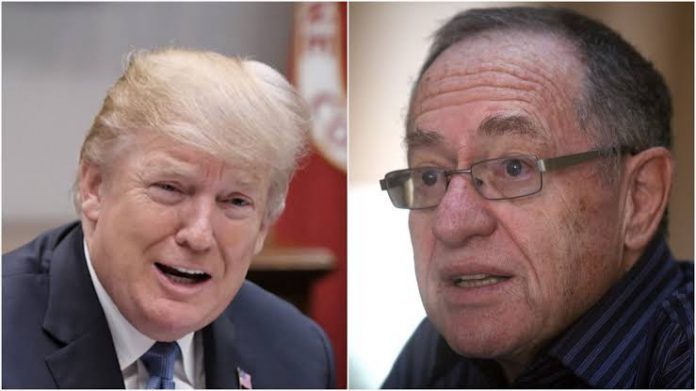 Constitutional Law Scholar and Harvard Law Professor Emeritus, Mr Alan Dershowitz has claimed impeaching US President, Donald Trump for ‘exercising his First Amendment rights’ would be dangerous to the constitution.

Njenje Media reports that Mr Dershowitz, who was Donald Trump Lawyer during the 2019 impeachment trial of the US President, was responding to a call for House Speaker Pelosi for Trump impeachment.

Nancy Pelosi had on Sunday announced that the House of Representatives will begin impeachment moves against President Trump for reportedly ‘inciting insurrection’ at Capitol Hill when his alleged supporters stormed the Capitol house to stop the affirmation of Joe Biden Electoral college win.

Njenje Media News quotes Pelosi saying she would have preferred Mike Pence, US Vice President to invoke the 25th Amendment to allow Trump’s removal but she understands that Pence has barely two weeks to remain at the White House and may not be feasible. According to her, she may have to hastily start impeachment proceedings, which will make Donald Trump the first ever US President to be impeached twice in a term.

But Dershowitz, a seasoned lawter, zayswhile he does not believe it would result in a Senate trial, impeaching President Trump over what he said in an address prior to protesters storming the Capitol building on Wednesday would provide a “loaded weapon” to both parties to use at their will in the future.

Speaking to Fox News, Dershowitz said that even if Trump is impeached for a second time, the Senate will not be able to hear a trial because Trump would be out of office by the time that were to happen.

“It will not go to trial. All the Democrats can do is impeach the president in the House of Representatives. For that, all you need is a majority vote. You don’t have to take evidence, there are no lawyers involved,” Dershowitz said.

“But the case cannot come to trial in the Senate because the Senate has rules and the rules would not allow the case to come to trial until – according to the majority leader – until 1 p.m. on Jan. 20, one hour after President Trump leaves office.”

Dershowitz added that “the Constitution specifically says the president shall be removed from office upon impeachment.”

He said that because it does not say “the former president,” the Senate’s “jurisdiction is limited to a sitting president,” barring the possibility of a trial.

Even without a Senate trial, however, Dershowitz warned against what a House impeachment could mean going forward. He said that according to the landmark 1969 Supreme Court decision in Brandenburg v. Ohio, President Trump’s words are constitutionally protected.

That decision said speech is not protected if it is “directed to inciting or producing imminent lawless action and is likely to incite or produce such action.”

Dershowitz, who was part of Trump’s legal team for his first impeachment, said that while he personally disapproves of what Trump said in his Wednesday address, “it comes within core political speech, and to impeach a president for exercising his First Amendment rights would be so dangerous to the Constitution.”

The professor said that impeaching a president for his words would set a precedent that was not envisioned by the framers of the Constitution.

“It would lie around like a loaded weapon ready to be used by either party against the other party,” he said, “and that’s not what impeachment or the 25th Amendment were intended to be.”