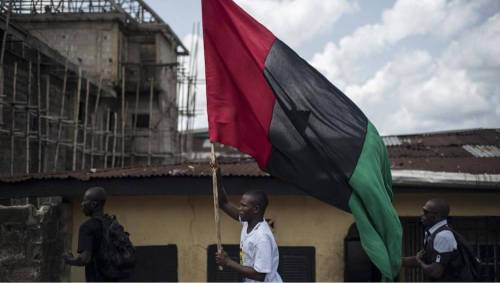 IPOB in a broadcast on Monday evening declared Thursday as a Sit-at-home protest over the president’s visit.

One of the IPOB executives, Mazi Chika Edoziem, stated this on Monday.

IPOB declared that Nigeria’s president is not “welcomed into Imo State, Biafra Land on Thursday, September 9, 2021.”

According to him, “all the traditional rulers, all ndi iche and every Biafran should stay away from any ceremony organised by Hope Uzodimma to welcome him.”

IPOB equally declared total lock down of Biafra on that day.

SaharaReporters had on Saturday reported that the Imo State Governor, Hope Uzodinma, disclosed that President Buhari would visit the state on Thursday.

The governor had made the disclosure at the Sam Mbakwe International Cargo Airport in Owerri.

Uzodinma had stated that his trip to Abuja was to “address some political matters and some critical issues.”

Uzodinma had announced that the President would commission “significant projects” while in Imo.

“Imo has been able to attract additional support from Mr. President on the management of some ecological problems in the state,” he had said.

On the Anambra election, Uzodinma had predicted that the All Progressives Congress (APC) would emerge victorious.

The governor had urged the people of the state and the South-East to align with the APC.

“Those who support the party at the centre will get both their rights and their privileges”, he had added.