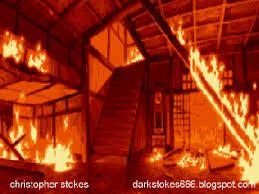 There was pandemonium in the early hours of Tuesday morning, as a lady, known as as Imole Shoronke, allegedly set her elder sister and her kids, on fire over a dispute on a 4-bedroom apartment inheritance.

Njenje Media News gathered that the incident happened in Dupeolu area of Idimu, Lagos when the suspect approached her elder sister on Monday to demand the outright sharing of inheritance their father left for them.

A source close to the family said;

“She was offered one room which she rejected for want of equal sharing. An argument ensued but allegedly left pacified after being told the circumstances surrounding the property.”

“Unknown to us that she was still in the vicinity, she waited until the wee hours of the morning when the victims were asleep and tore the net of the window to pour petrol into the room. She ignited the scene and the victims were burnt beyond recognition, “

It was later reported that she was caught and arrested after an alarm was raised by neighbors.

Luckily, the victims are receiving medical treatment in the hospital and responding to treatment.

RELATED POSTS:  Bandits Kill 42 In Attack On Farmers And Five Communities In Zamfara