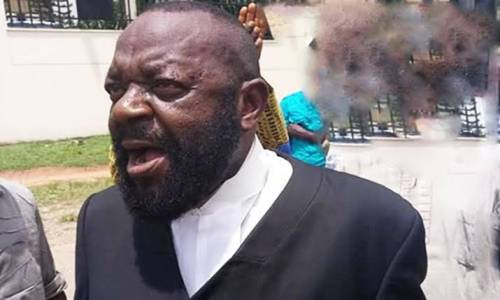 Aloy Ejimakor, one of the lawyers representing the leader of the Indigenous People of Biafra (IPOB), Nnamdi Kanu said he has sent some legal documents to the Directorate of State of the separatist group in defence of its members arrested by Ghanaian police last week.

The legal practitioner said the action was taken to prevent the arrested Biafra agitators from being sent to Nigeria.

Ejimakor revealed this on his verified Twitter page on Monday.

SaharaReporters had reported that Ghanaian policemen stormed the venue of IPOB’s monthly meeting around Mallam Junction in Accra on Sunday, arresting an undisclosed number of members of the group.

In a video obtained by SaharaReporters, the arrested members were seen singing a pro-Biafra solidarity song.

They were subsequently taken to a police station in Accra where they were profiled.

Reacting to this, the lawyer said the move was to also swiftly secure their freedom.

The IPOB leader, Kanu who had been overseeing the group’s affairs, was captured in Kenya and taken to Nigeria in June.

He has been in the custody of the Department of State Services (DSS) awaiting his trial slated for October 21 for charges bordering on treason, terrorism and others filed against him by the Nigerian government.

INEC To Use e-Voting For Anambra Governorship Election 2021