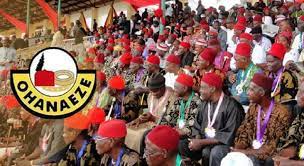 The attention of Ohanaeze Ndigbo Worldwide has been drawn to remarks making the rounds to the effect that “Ohanaeze Ndigbo disowns Ekweremadu” over his ordeal in the United Kingdom. While Ohanaeze Ndigbo owes it a duty to stand with our own, especially in times of difficulty, it is not in their character to be hasty with statements over issues without sufficient facts.
2. It is noteworthy that eminent Igbo patriots have at one time or the other, pleaded with impostors and pretenders to desist from reckless and unguarded statements that portray the Igbo in a bad light using the platform of the Apex Igbo socio-cultural organization, the Ohanaeze Ndigbo Worldwide. For purpose of clarity, the President General of Ohanaeze Ndigbo is Ambassador Professor George Obiozor while the Secretary General is Ambassador Okey Emuchay, MFR.
3. Amongst the Igbo, it is a cultural anathema to rejoice over a brother’s misfortune. And this is where the remarks by Mr. Peter Obi, the Presidential candidate of the Labour Party, is very germane and instructive. According to Obi: “My family and I are with the Ekweremadus over their travail. We join all men of goodwill in praying for the healing of their daughter and commit them into God’s hand for justice to be done.” This is an overarching agelong Igbo moral.
4. Ohanaeze Ndigbo salutes His Excellency, Engr. Dave Umahi, FNSE and Governor of Ebonyi State for his intervention to ensure that emotions and social media tigritude do not outweigh the facts in the matter.
5. Our hearts go to our daughter, Miss Sonia Ekweremadu; and it is our fervent prayer that Sen. Prof. Ike Ekweremadu, CFR; Lady Nwanneka Ekweremadu, PhD and family will overcome the current travails.