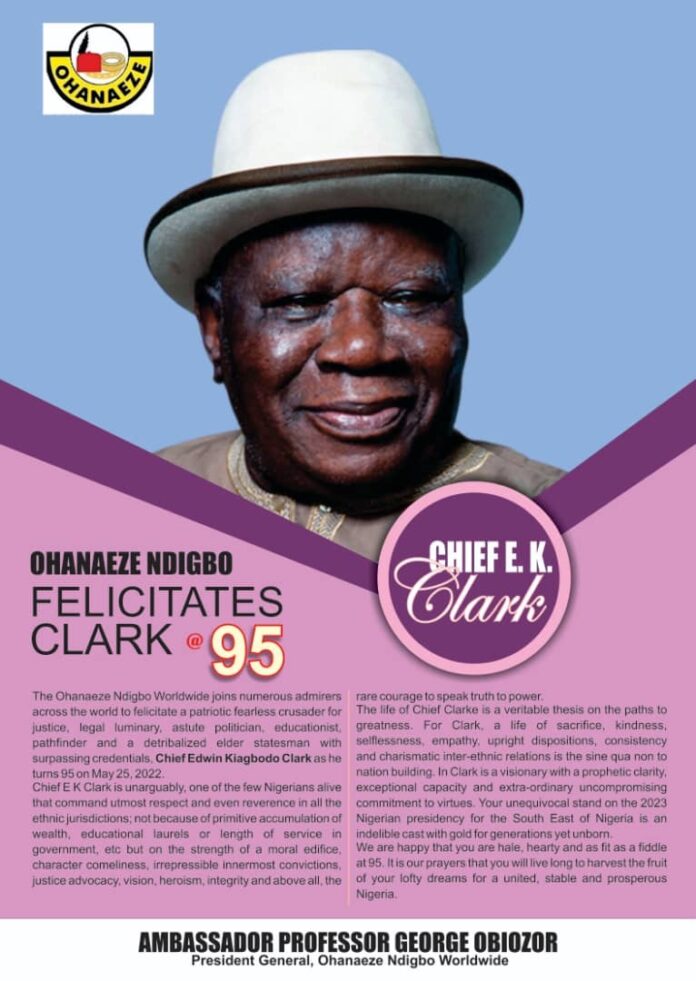 The Ohanaeze Ndigbo Worldwide joins numerous admirers across the world to felicitate a patriotic fearless crusader for justice, legal luminary, astute politician, educationist, pathfinder and a detribalized elder statesman with surpassing credentials, Chief Edwin Kiagbodo Clark as he turns 95 on May 25, 2022.
Chief E K Clark is unarguably, one of the few Nigerians alive that command utmost respect and even reverence in all the ethnic jurisdictions; not because of primitive accumulation of wealth, educational laurels or length of service in government, etc but on the strength of a moral edifice, character comeliness, irrepressible innermost convictions, justice advocacy, vision, heroism, integrity and above all, the rare courage to speak truth to power.
The life of Chief Clarke is a veritable thesis on the paths to greatness. For Clark, a life of sacrifice, kindness, selflessness, empathy, upright dispositions, consistency and charismatic inter-ethnic relations is the sine qua non to nation building. In Clark is a visionary with a prophetic clarity, exceptional capacity and extra-ordinary uncompromising commitment to virtues. Your unequivocal stand on the 2023 Nigerian presidency for the South East of Nigeria is an indelible cast with gold for generations yet unborn.
We are happy that you are hale, hearty and as fit as a fiddle at 95. It is our prayers that you will live long to harvest the fruit of your lofty dreams for a united, stable and prosperous Nigeria.
Ambassador Professor George Obiozor, President General Ohanaeze Ndigbo Worldwide