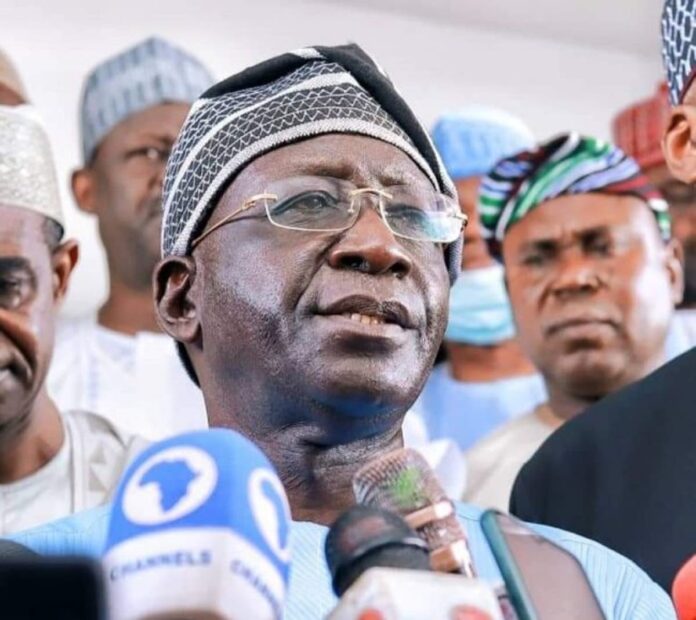 Signs that the embattled Peoples Democratic Party (PDP) national chairman, Senator Iyorchia Ayu, may yield to pressures on him to quit have emerged as party stakeholders have begun to consider some Southwest candidates as his possible replacement.

Sources within the PDP confided in The Guardian that though the issue is yet to be decided, some party leaders are pushing for a Southwest person to replace Ayu, stressing that the consensus opinion of members is that Ayu should go.

He disclosed that party stalwarts are considering whether to empower the National Vice Chairman (South), Ambassador Taofeek Arapaja, to act as national chairman pending a mid-term convention or draft former governor of Ondo State, Olusegun Mimiko, who is known to be an ally of Rivers State governor, Nyesom Ezenwo Wike.

“When the various leadership caucuses meet in the coming week, decision would be taken on the matter. But, for now, it is general opinion of members that Ayu should go in the interest of the party. We have a tradition; so, whether Arapaja is to act or somebody else would come in does not matter. We need to unite and move the party forward,” he stated.

This position, however, poses its own problem as using the party’s Constitution to resolve this matter may yield nothing, because if Ayu were to go, Ambassador Umar Iliya Damagun, Deputy National Chairman (North), will be the one to step in until a convention is held to properly constitute another executive, according to Section 45 (I and II) of the party’s Constitution.

Chairman, PDP Board of Trustees, Senator Walid Jibrin, dropped the hint about Ayu’s possible exit on Sunday, when he appeared on Channels Television programme, Sunday Politics.

Expressing his determination to ensure that peace and genuine reconciliation returns to the party, Senator Jibrin declared his readiness to even vacate his post to pave the way for PDP to achieve cohesion to win the forthcoming general elections.

He noted that the report on the crisis would be tabled to the leaders by next week, stressing, “when we find out that somebody is wrong in what has happened, we will come up openly to tell the party that it is wrong.

As the party’s national caucus, BoT and National Executive Committee (NEC) plan to meet any moment from now, it was gathered that the recommendation of the various reconciliation committees will guide action on the matter.

It was also learnt yesterday that while the Wike camp made Ayu’s exit their cardinal demand, some members loyal to the presidential candidate, Atiku Abubakar, insist that only through a mini convention after the general elections could Ayu be replaced.

Attempts to get Arapaja’s reaction to the development failed as the National Vice Chairman did not take calls or respond to SMS sent to his phone line. However, when contacted, the National Publicity Secretary of the party, Debo Ologunagba, said he was yet to know.

“Well, I am not aware of this. If it is happening, I will be in a position to know and it would be a decision of the organs of the party. And there is no such thing to my knowledge at this time.

“I am sure the NWC (National Working Committee) would have to meet, that is an organ of the party. Most likely, the NEC (National Executive Committee) will meet. The last meeting of NWC was last Thursday, the next one will be next Thursday and there is nothing like that on the agenda to my knowledge as at now,” Ologunagba stated.
BARELY four days after the Umaru Fintiri-led PDP peace panel met in Port Harcourt to reconcile the two factions of the party, an atmosphere of unease and anxiety has overtaken the party.

The camp of the Rivers governor has not just insisted that Ayu should resign, it is also seeking to be allowed to produce the next Chairman.

A check at the PDP national secretariat in Abuja on Monday revealed that the matter of the peace meeting dominated talks among several groups of party leaders and officials.

The Port Harcourt meeting according to a member of the NWC is “the beginning of the end” for the crisis, because the aggrieved leaders have laid bare their demands.

“What has also emanated from the meeting is that the speculation about the call for the resignation of Ayu as national chairman has been formally brought forward.

“It is now left for the other camp and the entire leadership of the party, including NEC to weigh the pros and cons and take a decision,” he said.

It was also learnt that the reconciliation process is being delayed by a new tussle over which camp produces the replacement to Ayu should he resign.

A NEC member disclosed that some disciples of Atiku prefer a member of their camp to be made chairman if Ayu resigns, but the Wike camp wants to produce the next chairman since the Atiku camp has already produced the presidential and vice presidential Candidates.

MEANWHILE, the chairman of PDP BoT, Walid Jibrin, insisted on Monday that Northern domination of the leadership of the party is unfair to other party leaders from the South.

Clarifying the statement he made on a television programme on Sunday night, Walid made it clear that it is unfair for the PDP to have its presidential candidate, national chairman and BoT chairman from the Northern part of the country.

At the moment, Atiku, Ayu and the BoT Chairman are all from the North. Even the deputy national chairman (North), who is constitutionally empowered to take charge should Ayu resign, is also from Yobe in Northeast.