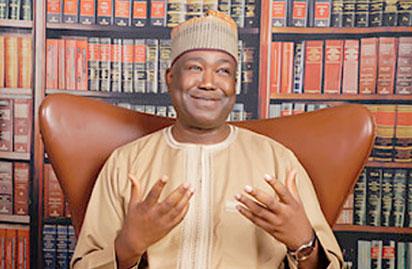 Former Presidential Candidate and a chieftain of the ruling All Progressive Congress, APC, Mr. Gbenga Olawepo-Hashim, has cautioned against the rising bickering over which region should produce the President, saying political parties have no power to zone elective offices, Njenje Media News reports.

Noting that the bickering is adding a fodder to the raging flames of instability in the polity, he said, “while we recognise the freedom of expression of every Nigerian, utmost care is needed now more than ever before not to complicate the delicate situation of the country by pitching one section of the country against another.”

Arguing that it is the constitutional right of every Nigerian who meets the qualification criteria to stand for elective office regardless of their ethnic descent or religious persuasion, he said: “Any politician that wants to contest to be President from wherever can jolly well jump into the ring, there is no need to continuously blackmail the country by hiding under ethnic nationality groups. While political parties can zone party offices they have no power to zone elective offices. There is no need to split hot air over this any further,” he said.

He also maintained that whatever hue and cry that were raised in the past about a section of the country been excluded from being President has been settled by our experience since the return to democracy in 1999, adding that “of the 22 years since 1999, the nation has seen 14 years of President from Southern origin -Obasanjo’s 8 years and Jonathan’s 6 years. When Buhari by the grace of God ends his tenure in 2023, we would have seen Presidents of Northern origin for 10 years. This should be enough to lay to rest the divisive arguments about power rotation.“

Olawepo-Hashim cautioned: “While we recognise the freedom of expression of every Nigerian, utmost care is needed now more than ever before not to complicate the delicate situation of the country by pitching one section of the country against another. This will be pouring gasoline into a raging inferno.

“If we allow ethnic nationality groups prompted by different factions of the political elites to continue to drive the debate on our future, we shall soon arrive at 350 confusing pathways as Nigeria is made up of 350 ethnic groups.”

“The other day, I saw a video of people speaking that even if the Yorubas are to produce a President, it cannot be from Ogun-Lagos axis again after Awo, Obasanjo, Abiola, Shonekan, Diya, Osinbajo and so on and so forth. This is what you get if you yield the polity to ethno-religious tantrums.”

He argued that power rotation argument is always emotive and tears nations apart. “This is exactly what led to genocide in Rwanda causing the killing of 800,000 souls and same thing that ignited the collapse of Yugoslavia to an extent that virtually every county wanted to become a country,” he added