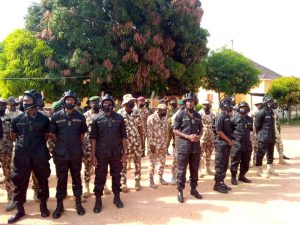 The last week has been different in drama, trauma and in death. The calamity has been extensive as terrorists focused intensive attention on Kaduna, the historical capital of Northern Nigeria and Abuja, the political capital of the Nigerian Republic.
First, they invaded the Airport on Saturday march 26, 2022. Two days later, Monday, they bombed Kaduna Abuja rail track, derailed a moving train, killed some killed, injured many and kidnapped many more. Feeling unchallenged and more confident, four days later, they invaded an Army barracks, killed 16 soldiers, injured 40 and according to vanguard of 6th April carted away arms and ammunition after burning down 3 army Attack Tanks.
With clear agenda coupled with flawless demonstration of capacity, they acutely dominated and morbidly choked the Armed forces and cut off the transport infrastructure of both critical cities. It is as if the refrain is: “Take over the two Capitals simultaneously, subdue the Army, break communication completely, and match from there onwards to take over Nigeria.” Not a sound from our President. The stark reality today is that Abuja and Kaduna have been intensely and robustly isolated by land, rail and air and the two zones completely insulated from each other and totally and entirely choked up.

KADUNA AS FOUNDATION OF NIGERIA SECURITY