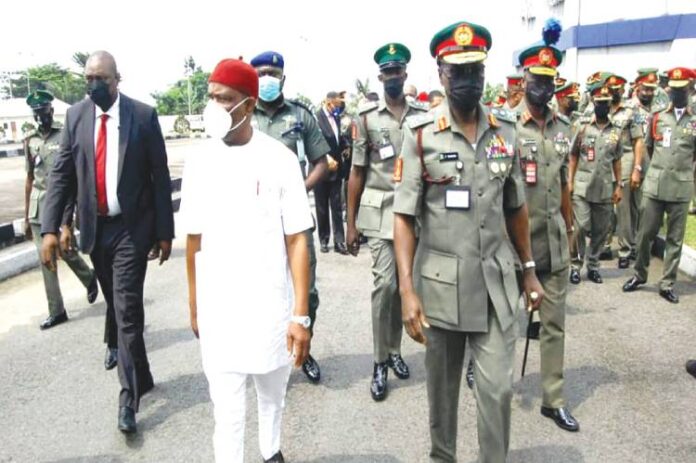 Rivers State Governor Nyesom Wike has reiterated the need for national unity, even as he said God made no mistake in bringing people of diverse cultures together under one nation, Njenje Media News reports.

The governor, while receiving the Chief of Army Staff (COAS), Lt.-Gen. Farouk Yahaya, who paid him a courtesy visit at the Government House, Port Harcourt, noted that the war against insecurity had suffered a setback because Army officers became partisan instead of being professional.

He buttressed his claim that officers and men of the Nigerian Army (NA) were involved in politics by citing the roles they played during the 2019 general elections in the state.

He alleged that the sixth Division of the NA in Port Harcourt was turned into a collation centre during the elections.

The governor however, added that Rivers State women were able to stop the Army from rigging the polls.

Wike assured that his administration was always willing to work with all the security agencies in the fight against crimes in the state.

His words: “I don’t understand why we cannot remove politics from our jobs. Let’s do our jobs and keep the country going. I can tell you that I’m willing and ready to work with all the security agencies, not only the Army.

“The gunboats we are providing are almost ready. We have paid for everything. We will also provide vehicles. All I need is the security of my people. I’m here to partner you.”

Wike pointed out that banditry, kidnapping, and agitations were different dimensions of crimes that had put Nigeria in a dire situation.

According to him, while no form of criminality should be condoned, those agitating against perceived injustice and seeking to address their grievances, should not adopt violence.