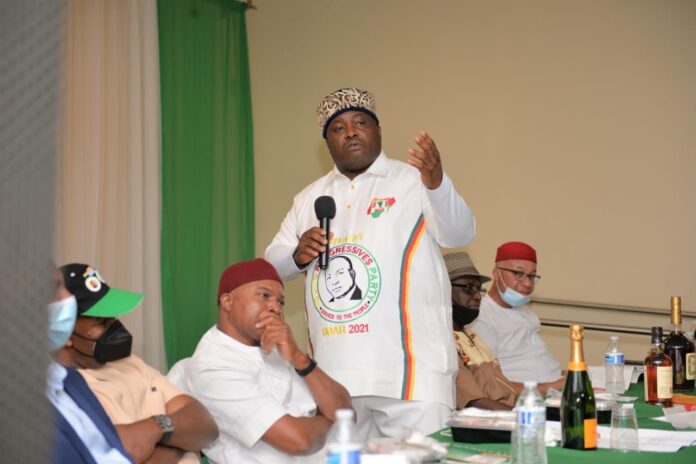 How do we begin to weigh the performance of the Honorable Senator representing Anambra South Federal Constituency in Nigeria, Dr Patrick Ifeanyi Ubah(Ebube Chukwu Uzo)

What was billed to be a town hall meeting for his constituents and other Nigerians in diaspora turned out to be the most elaborate meeting of minds-bar none.

After the meet and greet aspect of the town hall meeting, which was conducted by my Publisher and master event planner Chief Chike Nweke. The floor was thrown open for a question and answer session.

After receiving his voluminous line of questions from the constituents, Honorable Dr Ifeanyi Ubah, began his truthful and unwavering dissection of the innuendos in the media that has trailed his successful life, both as a private businessman and a politician.

The Senator fired from all cylinders ranging from questions bordering around his business dealings with fellow Nigerians, particularly his own kinsmen and friends, now turned detractors.

As the conversation transcended beyond the diffused innuendos of his supposed business recklessness- with truthful facts and figures of the actual context of those deals and his exoneration of wrongdoing. The crowd cheered in relief of hearing the truth, because only the truth will set us free.

Some unsatisfied constituents from all parts of Nigeria shifted gear and began another line of onslaught ranging from his dealings with the Federal government of Nigeria in the downstream oil sector.

His Honorable beckoned on the audience for more investigative questions with the Federal government and began a well embellished retortation, again the unassuming Ebube ChukwuUzo, -quenched the thirsty audience with facts and figures. Which in essence explained the unsuccessful witch hunt tactics that was manufactured to bring down his financial empire-suffice to say that he let the skeleton out of the closet,without fear of future reprisal.

At one point, the moderator beckoned on him to watch his steps to avert a possible fall from the two feet elevated podium and he responded in affirmation, saying that he never falls in Igbo Language ” Abum ada ada.”

It was indeed a class performance by our fearless Senator, Dr Ifeanyi Ubah (Ebubechukwu Uzo). They came, they saw, he conquered.