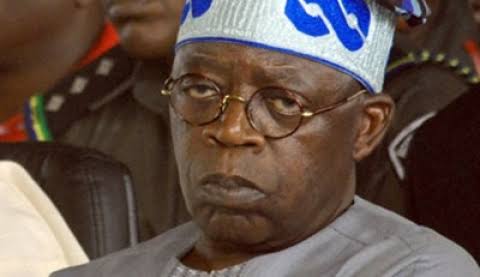 The opinion writer in an article warned Nigerians of the dire consequences of electing another misfit into power just like the outgoing President, Muhammadu Buhari.

Njenje Media News has a copy of his article, read below:

Tinubu: A Presidential Disaster Waiting to Happen?
By Farooq A. Kperogi
Twitter: @farooqkperogi

Anyone who has watched Bola Ahmed Tinubu closely and dispassionately can’t help but notice that the man is not well. He is a walking psychedelic calamity. His endless verbal miscues and nonverbal cues constantly conspire to construct the profile of a man who is battling a troubling internal turmoil, who is held hostage by disablingly malefic inner demons.

He appears to revel in his own self-created alternate universe that is always lightyears away from ours. When he speaks and walks, he strikes the observer as a man in a daze, in a cripplingly drunken or narcotic stupor. He slurs his words, slacks his attention, blanks out, has awkward gaits (which caused him to trip at Arewa House in Kaduna recently), and seems impervious to the world around him. That, for me, is the outward manifestation of an inner turbulence.

For instance, during a speech on April 8 in Abuja on the occasion of the launch of Aisha Buhari’s biography titled “Aisha Buhari: Being different,” Tinubu misidentified Dolapo Osinbajo, wife of Yemi Osinbajo, as the “wife of the president.”

The slip-up was cringeworthy not just because Tinubu was reading from a prepared speech but because even after an awkward pause and a dazed gaze, he failed to correct himself. That was not the picture of a man who was in control of his mental or sensory faculty.

Ten days earlier, on March 29, he betrayed an even more disturbing dissociation from quotidian reality during a speech in Kano on the occasion of his 69th birthday celebration. He suggested that an effective way to fight unemployment in the country and demobilize bandits in the North was to employ 50 million youths into the military.

“To recruit from the youths who are unemployed—33 percent are unemployed?” he said followed yet again by an uncomfortably stuporous 12-second silence. “Recruit 50 million youths into the army and errr [indistinct]. Take away from their [i.e. the bandits’] recruitment source. What they will eat— cassava, errr, agbagdo, errr, corn, yam in the afternoon… it is grown here. You create demand and consumption for over five million army of boot camps.”

Although his press aides later issued a statement saying he meant “5 million youths,” not “50 million youths,” this was another wild, public performance of hyperaroused dissociation from reality. The clumsily uneasy silence, the dazed gaze, the inelegant repetition (egbado and corn refer to the same thing, but they are different in Tinubu’s alternative world), and the illogic that punctuated Tinubu’s speech appear to be only symptoms of a more insidious inner struggle.

This suspicion shows up every time Tinubu departs from the professionally dexterous mediation of his inventively resourceful media team.

For another recent example, go back and watch the incoherent and illogical video of his October 2020 response to the Lekki Massacre. As I pointed out on social media at the time, he appeared to be either in a bacchanalian daze or a somnific trance—or both.

Tinubu has one of the, if not the, most sophisticated propagandists and mind managers in Nigeria, but he sometimes overrules his media minders and rants in public while in an unflattering mental state. A proverb says, “Better to remain silent and be thought a fool than to speak and to remove all doubt.” The inverse is true for Tinubu. Through expert media manipulation by ingenious spin doctors, we have come to associate Tinubu with political and cognitive sophistication and admirable intellectual heft.

If he had remained silent, he would have nourished and sustained this myth, but his unceasingly scatterbrained and unhinged public performances show us a man who is incapable of a basic presence of mind or a coherent thought-process for a sustained period.

We now know his only strength is that he has excellent speech writers, artful PR professionals, and an army of well-paid, overzealous social media and traditional media battering rams. Not all wealthy people hire the best, so he deserves credit for that.

Now Tinubu is expending every imaginable financial, political, social, and symbolic resource at his disposal to become president. With Abba Kyari out of the way, he just might sleepwalk his way into the presidency while the rest of the country laughs at his gaucheries.

In previous columns, I wrote with cocksure certainty that Tinubu would never be president. For instance, in a September 21, 2019 column titled “Why Bola Tinubu Can Never Be Nigeria’s President,” I pointed out, among other things, that “the most important reason Tinubu can never be present is that the people who currently wield political power, to whom he is a witlessly obsequious bootlicker, won’t hand over power to him—or to anybody—in 2023.”

I also revealed that “Before the 2019 election, a friend of mine who is close to Abba Kyari confided in me that after the election they would ‘deal with Tinubu and his people.’ He bragged that by the time they are done with him and his underlings, he would be so damaged that he won’t even be an option for the 2023 presidency. It’s already starting.”

Well, Kyari died and the old cabal no longer exists. Abubakar Malami, the Attorney General and Minister of Justice, is now the head of a reconfigured Aso Rock cabal who takes presidential decisions. Although he is as determined as Kyari was to stop Tinubu’s presidential ambition dead in its tracks, he isn’t nearly as ruthlessly shrewd as Kyari.

For one, INEC’s purchasable chairman isn’t as indebted to Malami as he was to Kyari since Kyari singlehandedly put him in his position and dictated his every move. Tinubu can deploy his enormous war chest to buy up INEC.

For another, Malami has no control over APC’s fissiparous factions. Although he controls the dominant faction of the party, he is challenged by the Fayemi/El-Rufai faction and by the Tinubu faction. But he doesn’t have the sobriety to realize that being a surrogate president who hires and fires people while the man who pretends to be president withers away in silence isn’t enough.

Most importantly, though, although Malami and Tinubu are Nigeria’s fiercest political enemies today, they are actually more alike than unlike. Like Tinubu, Malami lives in his own little world. I have watched videos of his media interviews and noticed that his eyes are almost always bloodshot, his body shakes uncontrollably, and his limbs whirl involuntarily. These are telltale signs of something more profound. No surprisingly, like Tinubu, he also lives in an alternate universe.

I am now prepared to be open to the possibility that Tinubu can become president if no one outsmarts him. But it would be a tragic presidency.

After eight years of Buhari’s vacant, dementia-plagued presidency, the last thing Nigeria would need is even a single day of another presidency that is ensconced in an alternate universe and that would be conducted through press releases and public opinion manipulation by devious mind managers.

If Nigeria is to have a chance at survival, it shouldn’t make the mistake of replacing a dementia-ravaged Buhari with an emotionally and mentally troubled Tinubu. At the minimum, we need a sober, self-aware, cosmopolitan person who respects and shows sensitivity to our diversity.