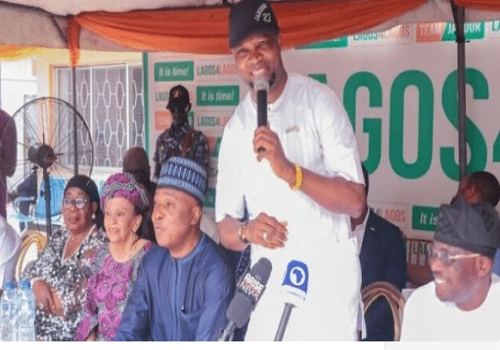 Abdul-Azeez Olajide Adediran, the governorship candidate of the Peoples Democratic Party, PDP, in Lagos State, has said that Governor Nyesom Wike of Rivers State is so poor despite having a lot of money at his disposal.

He further declared that he would defeat Governor Babajide Sanwo-Olu of Lagos State despite the recent endorsement by Wike.

Wike had recently endorsed Governor Sanwo-Olu for a second term, vowing to support the Lagos Governor even though they do not belong to the same political party.

Wike stated this during a conference organised by the wives of Lagos State officials on Tuesday at Eko Hotel, Lagos.

But appearing on Arise Television on Thursday, Adediran said that most Lagosians did not even know that Wike was in the state.

“Wike has an unrepentant and irreversible way of life. This is not one more of Wike,” he said.

“As I said, Wike is Wike, and everybody knows. Where there’s no expectation, there’ll be no disappointment. So that I’ll consider it inconsequential. It’s desperation.

“They know that inviting Wike alone to come without even given any brief, Wike will be Wike, but as you would see if you know Wike very well, he would have said a lot in that space if he had had a whole lot to do with me and how I emerged as the candidate of the party.

“So I wonder how somebody with all his might within the PDP and didn’t support me during the primary because he was supporting something with structure because he needed that structure because I didn’t have anything when I came and couldn’t stop me, will now decide if I govern the state of Lagos or not.

“That’s for the generality of Lagos [to decide]. Not for us. We’re focused on our election [not all ]this Wike endorsing anybody.

“Like I said, read my lips. I’ll defeat Sanwo-Olu and anybody supporting him, home and abroad.

“Let me say this, some people are so poor that the only thing they have is money. And the kind of riches, wealth that Jandor has and the movement is in the people, notable people, that money cannot buy it.

“And I’ll create your indulgence to bury this Wike issue that way. It is considered inconsequential. I started my campaign yesterday and the people of Alimosho I went to see yesterday didn’t even know somebody came to Lagos to endorse somebody.”