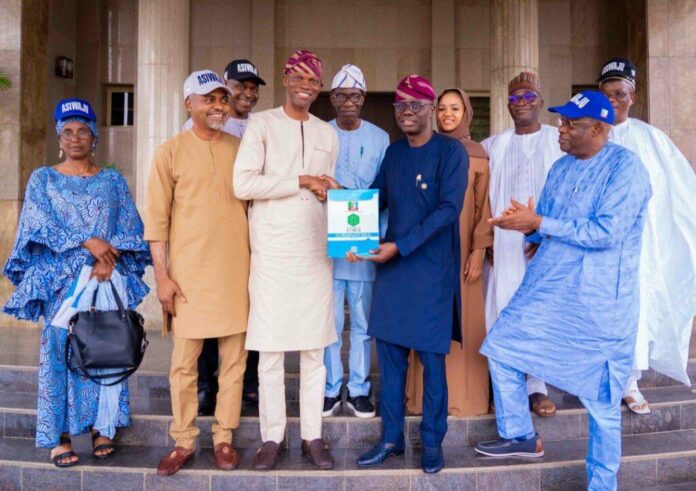 Governor of Lagos State, Babajide Sanwo-Olu  on Friday picked the All Progressives Congress (APC) Gubernatorial Nomination and Expression of Interest forms ahead of the primaries for the 2023 elections, Njenje Media News reports.

The forms were picked at the APC’s national secretariat in Abuja by a member of the House of Representatives, representing Ikeja Federal Constituency, Mr. James Faleke.

Faleke, who also picked presidential Expression of Interest and Nominations forms for APC Leader, Sen. Bola Tinubu, was accompanied by former Secretary to the Government of the Federation (SGF), Mr. Babachir Lawal, and members of the Tinubu Support Groups (TSG) to the party’s secretariat.

The governorship Expression of Interest and Nominations forms were later presented to Gov. Sanwo-Olu at the Lagos Governor’s Lodge, Asokoro, Abuja by the Chief of Staff to the Governor, Mr Tayo Ayinde.

Reacting in his verified Twitter handle, Sanwo-Olu notified that Mr. James Faleke picked up the nomination and expression of interest for a second term forms from the APC secretariat, in Abuja, on his behalf.

”The work towards a Greater Lagos never stops. The actualization of our T.H.E.M.E.S agenda is a collective responsibility that can only be achieved through trust and accountability.

”A big thank you to our dear party, APC, especially the leadership for their vote of confidence, and the good people of Lagos state for their trust, and for always holding us accountable.

”Governance is a huge responsibility, and all hands will continue to be on deck, as we work tirelessly towards achieving our goals for a Greater Lagos,” he said.

The governor had also received endorsement from prominent individuals and groups in the last few weeks.

They demanded that he should throw his hat into the ring for a second term, based on his remarkable performance during his first term in office.