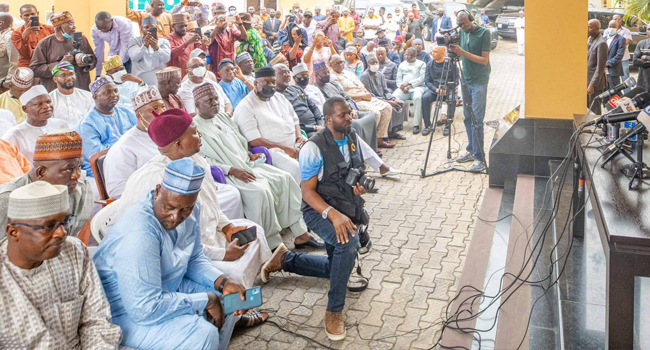 In recent times we all have been bludgeoned with all sorts of intimidating but baseless propaganda about the indomitability of the northern political manoeuvres going into 2023.
Many have come to believe that..
1.The 2023 presidential election winner can only be decided by the north.
2.That the south is and will remain at the mercy of the north concerning the issues of the presidency of Nigeria.
3.That Atiku and his few other northern PDP aspirants are the only viable options for the party.
4.That the South East don’t have the votes to support any candidate that may be chosen from there because they don’t normally go out to vote.
5.That the NW and NE have block votes that cannot be marched.
6.That the north has monopoly of the ability to rig.
7.That it was only Tinubu’s command of(a doubtful) cult following in the SW that gave APC victories over the years.
8.That issues won’t matter in the coming election and that people will just go vote as directed by the (over glorified) political ‘leaders’ who are mere jobbers.
9.That the generality of Nigerian youths and other sane citizens will not participate or make any meaningful impact on the outcome of the general election.
10.Finally,that the persecution of almost every tribe in Nigerian by the Fulanis will not matter or affect the outcome of the elections.

All these fallacious and baseless arguments as recently canvassed by some known paid political pundits should best be left within the realms of the imagination of these paid or uninformed speculators.
Any serious political actor or follower of the Nigerian political geography knows that the north cannot seriously believe they hold the four aces come 2023.
History does not support their grandstanding.

In 1959..NPC could not form a government without an alliance from a section of the south.
In 1979….NPN’s Shehu Shagari could not clinge the needed 13 states to win.They fell back on the supreme court to chisel out 2/3 of a southern state votes (with the infamous 12 2/3 of 19 judgement) to install him president due to the precarious state of the nation then.
In 2003..The stake of the north on Buhari flopped woefully.
In 2007….Their stake on Buhari flopped again woefully even against a fellow northerner Musa Y’ardua.
In 2011…Even after all the gang up to screen out and prune down to an anointed candidate and endorsements from the whole north,they failed again woefully against GEJ who was heavily supported by the SS and SE.
In 2015..Buhari managed to win in part because of the support of Tinubu’s ACN and the Splinter nPDP group.
It is worthy of note that in all these trials their turnouts in the core NW & NE states were the same but that never clinged the seat for them until 2015 when the mismanagement of political fortunes of the PDP by GEJ managed to let useful allies from Rivers,Sokoto and Kano to move from his camp because of inexperience,lack of political sagacity and poor bargaining ability.
What did anyone expect when his henchmen like OBJ,and all those that formed his political bulwark left to the opposition?
All reasonable advices were shouted down then with the drunkenness of power of incumbency.

However,it is convenient for political jobbers to brandish the outcome of the 2015 election as the making and political dexterity of the north,without giving reasons why the north was never able to do so previously in 2003,2007,& 2011?.

2.The south is not at the mercy of the north and will never be.From history of presidential victories nobody has been able to win the presidency if he compromises more than 2 out of the 3 states of Lagos,Kano and Rivers states.
Shagari struggled in 1979 because he lost Lagos to Awo and Kano to Aminu Kano.
Bashir Tofa of NRC struggled because he lost Lagos,Rivers and even Kano to Abiola.
OBJ was lucky because he won Kano and Rivers,though he lost Lagos to Falae.
Y’ardua and GEJ both won Lagos and Rivers.
So the north can flex all they want,but without either of these two southern states they go no where.
Buhari needed Lagos so bad in 2019 that he had to go back cap in hand to beg Tinubu and his western allies.Why didn’t he go it alone if the north thought they could deliver him?
As I write Kano is going NNPP,( just like they did with NEPU/PRP in 1959/1964/ 1979 & 1983).
Lagos will surely swing South in 2023 Tinubu or no Tinubu.
Rivers is off limits already,so where will the north get the votes to win?

3.Viability of Atiku and co…….It may surprise you to know that what has bouyed Atiku’s political relevance so far has been the votes from southern states.
In 2019,the votes Atiku got from Akwa Ibom,Rivers,Anambra and Delta states combined was more than he got from almost all the NW & NE states put together.
Anambra state gave him 524k votes which was more than the 410k votes he got from Adamawa his home state.
Akwa Ibom state gave him 395k votes which was only 15k votes less than Adamawa.
Rivers state gave him 476k votes which was over 60k more votes than Adamawa..!!!
So when we talk rubbish about viability and what people come to the negotiation table with what do we mean if not votes?
How many votes are Tambuwal,Saraki,Bala and Atiku coming to the table with?
You can’t come with my votes in your pocket to negotiate with me.
Peter Obi’s Anambra gave Atiku over half a million votes in 2019 while Adamawa his state came with only 410k votes !!!

4.Let nobody fall under the illusion that the SE & SS do not also have their million-votes capabilities like Katsina,Kano,and Kaduna.
In all the past 5 presidential elections of 2003,2007,2011,2015,& 2019,the north has been presenting candidates and have been trying to protect one interest or the other.It was therefore expedient that they poured out to vote because they had interests at stake hence the large voters turnout.
The SE had no stake except in 2011 when GEJ was perceived as a close ally and an in-house candidate .
The SE & SS had no motivation to go out and vote before then.
However in 2011 do you know that
Abia brought out 1.1m. Imo..1.3m,
Anambra 1.17m. Delta 1.3M.,and
Rivers 1.8M. votes for GEJ? Do you think those voters are all dead now? Why would anyone come out when he doesn’t have a direct interest in what’s going on? Now do you know that in 1999 presidential election where two SW candidates were running and the north had no interest,the total votes cast in Sokoto was 355k votes, Kano 800k votes,Yobe 311k votes?
These are all the same states that consistently gave Buhari over 1m votes each in 2003, 2007,2011,2015, and 2019,.!! Why didn’t they come out in 1999?
So,you see,just as the good book says, ‘where your treasure lies there will your heart be’.
Next time you write that the SE & SS don’t go to the polls find out where their heart is.Give them a SE or SS candidate and see where the votes will be.
We can match the north vote for vote and rigging for rigging when the need arises as it will soon arise.

5.The much touted Tinubu prowess is really becoming undistinguishable.
With all the bullion vans and loss of interest in the presidential election of 2019 after the violence that greeted the Lagos state Guber election,the APC only marginally won Lagos with only about 130k votes,Ogun state with 86k votes,Ekiti with 36k votes and Osun state was won with just 10k votes.They lost Ondo and Oyo states.The average turn out in those SW states was about 500k votes despite the fact they had a sitting VP on the ballot.This means that the SW is already having a voting fatigue towards the north.
This was far below the votes from the SE and SS,one then wonders where the Tinubu midas touch was?May be a time for serious clout audit has come, to really price these political jobbers appropriately.
It is possible that Buhari and the APC inner caucus know a thing or two about his dwindling sphere of political influence we all don’t.But a window is still open for his reawakening.We shall visit that in due course .

RELATED POSTS:  The Afghanistan Crisis Is An Indication That We Must Preserve Nigeria’s Peace And Security -- Journalists Association

7.Issues do matter in elections and in 2023 major issues shall show up.
What will Nigerians do when a cross section of the country begin to talk about replacing one Fulani with another Fulani in a country of over 235 ethnic nationalities.Do we think enough media campaign will take that off the political stage?
What will become of religious bigotry that is presently smouldering with a possibility of snowballing into something else?
What will become of the desire for restructuring come 2023,how will the populace respond to even a new party that cuts this into it’s central manifesto ?
What will the state of the economy and challenging food and fuel prices do to the campaign.
What will the issue of Fulani herdsmen,and general insecurity do for a carefully managed campaign.
Some how some of these issues will bear their fangs on this 2023 elections whether we like it or not.Endsars movement may even resurrect and hijack a political party ,who knows..

Can the south turn the table….?Yes they can.All it will take is honest desire to pursue reason.If the west decides to nail the unbecoming arrogance of the north once and for all,that time would be now!!
If Tinubu retreats from his foray in empty pursuit of the APC ticket after being bruised by the north and teams up with already reasonable minds like Akeredolu,and Afenifere Elders,PANDEF,and Middle Belt forum to Support a detribalized sellable SE candidate like Obi,No northerner can match that ticket.
What do you think will happen if the SE/SW ticket is floated under a new party platform made of SDP,NNPP,APGA ,southern Offshoot of PD( Ekweremadu,Abaribe etc),and Offshoot of APC(Tinubu & co)?
Surely the Middle belt will not vote another Fulani man even in their dream,and no southerner will depart from this course of voting in 2023.
If we decide to be less ruthless in nailing the Fulani schemes a SE/ kwankwaso ticket with active support of the SW will also be a winner.
In all these we can see a pathway to victory against the agressors who think the opportunity given to them by all has become a right.
The ball is in the courts of the SW to rise above selfish mediocrity and grab the extended hand across the Niger.The SE did it twice for OBJ,…a good turn deserves another.
This may be the safest way against Fulani aggression, expansionism,ethnic cleansing, resources plundering and fastest way to restructuring.
Enough of this grandstanding. It’s time to take back what is ours !!!
@Chuma Okeke.