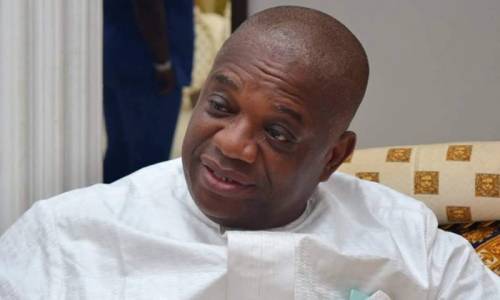 Former governor of Abia State, Senator Orji Uzor Kalu, has lambasted the former Lagos State Governor and national leader of the All Progressives Congress, Bola Tinubu, and Vice President, Prof Yemi Osinbajo and other presidential aspirants from the South-West and South-South, describing them as greedy politicians without conscience.

Kalu claimed that the gods of Igboland were asking questions, demanding an answer as to why the politicians lacked conscience and decided to contest, Njenje Media News reports.

The former Abia State Governor said this in an interview with Channels Television on Monday evening.
According to Kalu, had these politicians not been greedy, they would not have entered the race for the presidency come 2023 knowing that with fairness and equity in display, it is the turn of the South-East region.
“Bola Tinubu was my colleague as governor, if they have conscience, they will not run for president. But they have no conscience. Obasanjo was president for eight years, Osinbajo was vice president for eight years and South Easterners have never been president for one year.
“How would you sleep if you were in my position? The gods are asking questions in Igbo land, ‘where are these people?’ The gods of the Igboland, they’re asking ‘why would these people come again?’
“And the answer is that they are greedy. They should stop being greedy. And that’s what is killing Nigeria. If you work you allow your brother to work; if you rule you allow your brother to rule. I’m being sincere.
“All of them in that list are my friends. My children lived with Tinubu’s wife; so it’s not a new thing to me. I just want people to have conscience before all of us die because we’ll die one day. So they should have conscience.”