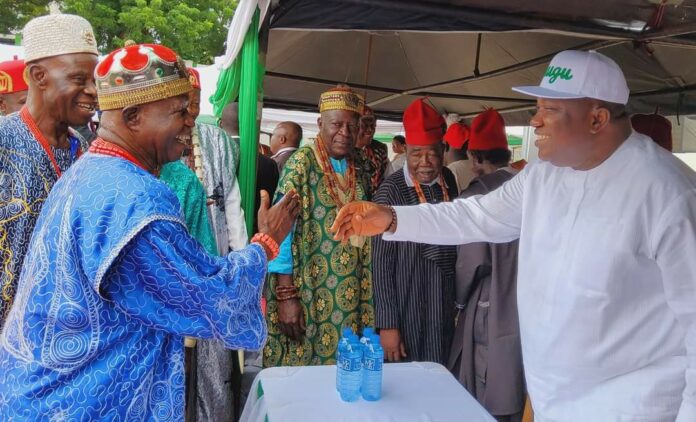 The Chairman of Igbo-Etiti Local Government Area, Hon. Ikenna Nwodo, on Friday, led the youths of the council, under the umbrella of ‘Peace Ambassadors for Gburus’ to the Government House, Enugu, to declare their unanimous support for Governor Ifeanyi Ugwuanyi’s senatorial bid and that of the governorship candidate of the Peoples Democratic Party (PDP), Dr. Peter Ndubuisi Mbah and other candidates of the party, declaring that “the sins of the fathers, the mistakes of those before us can never befall us.”

“We are telling you (Ugwuanyi) that all Igbo-Etiti youths are solidly behind you to represent Enugu North Senatorial District in the Senate in 2023, our incoming governor by the special grace of God, Barr. Peter Mbah, Hon. Ezenta Ezeani (PDP House of Assembly candidate) and Rt. Hon. Dr. Martins Oke (PDP House of Representatives candidate).

The Council Chairman appreciated the Director General of Peace Ambassadors for Gburus, Hon. Martins Ugwuamadieze, for his immense support and grassroots mobilisation and charged the teeming members of the group to remain focused and committed to the tasks ahead, saying: “It is operation deliver your polling units. We are here not only to support our leader, but to also support all other PDP candidates for the coming elections. It is operation deliver your polling units.”

RELATED POSTS:  Nigerians – Will it be Self-Determination or The Fulani Caliphate’s System? Decide Today! - Ndidi Uwechue -

In his speech, the Director General of Peace Ambassadors for Gburus, Hon. Ugwuamadieze, corroborated Hon. Nwodo’s statement, adding that they are ready to do the work they have agreed to do satisfactorily.

Stressing that “Igbo-Etiti is PDP and PDP is Igbo-Etiti”, the DG reassured Gov. Ugwuanyi that “we are going to come first in the forthcoming general elections because our Digital Mayor, Ikenna Nwodo, is doing all it takes to make sure that everybody supports you and the PDP.”

Hon. Ugwuamadieze applauded Gov. Ugwuanyi for the youths’ participation in governance, stating that the governor has “given every Igbo-Etiti youth a sense of belonging by the emergence of these young men from our council area.

Also at the Government House, Enugu, on a solidarity visit to Gov. Ugwuanyi, were teeming members of Mmagha Support Group for Gburugburu 2023, led by the Director General of the group, Dr. Joel Ugwuoke.

The group equally assured of its unalloyed support for Gov. Ugwuanyi’s senatorial bid in 2023, that of the governorship candidate of the PDP, Dr. Mbah and other candidates of the party in recognition of the governor’s remarkable achievements and uncommon leadership style.

Delivering the group’s message, the DG, Dr. Ugwuoke told Gov. Ugwuanyi, who was with traditional rulers of Enugu North Senatorial District led by the Grand Patron of Enugu State Council of Traditional Rulers, HRH, Igwe Simeon Osisi Itodo, that “we are here to let you know that come 2023 we are solidly behind you and other PDP candidates.”

RELATED POSTS:  INEC Chairman Says Conduct Of Anambra Election The Most Challenging Ever

The DG hailed the governor for his administration’s fruitful investment drive in Enugu State, disclosing that “I am one of the beneficiaries because you provided the enabling atmosphere for that (investment) and investors are coming to invest in our communities.”

He added: “For instance, in my community Eroagu, white men built some factories there because of the enabling environment you created in Enugu State.

“In Nsukka, our sons have attracted the Nollywood Industry because you developed Nsukka. We have good roads and I am proud of it whenever I am inviting visitors and business associates to Nsukka.

“The judiciary buildings we had before were too local and dilapidated but you transformed them by renovating and constructing modern ones.

“Your Excellency, your projects are uncountable. We have taken note of them and when we come for campaign we will list them.

“The number of people you are seeing here are just the numbers that can be contained here. We all have agreed that we will support all the candidates of the PDP. We will deliver in all our polling units.

“So, I will advise that you should never stress yourself but allow us to do the job because your good governance will speak for you and we plead that you continue the good work.”

In their separate speeches, the Commissioner for Transport and a staunch member of Mmagha Support Group for Gburugburu, Hon. Andy Peter Omeje, the Zonal Coordinator of the group, Hon. Fidelis Ojobo, the woman and youth leaders, Mrs. Ijeoma and Chinonso Ugwunweze respectively, all expressed gratitude to Gov. Ugwuanyi for his administration’s youth-friendly initiatives and developmental strides, particularly the ongoing massive projects at the newly established State University of Medical and Applied Sciences (SUMAS), Igbo-Eno, Enugu State, and the attraction of the Federal Polytechnic, Ohodo, with their inherent benefits to the people of Enugu State, among others.

While addressing the crowd, Gov. Ugwuanyi identified and empowered three physically-challenged persons who were among members of the support groups at the Government House, Enugu financially to enable them establish businesses of their choice, amid jubilation.

The Executive Secretary of Enugu State Christian Pilgrims Welfare Board, Barr. Nestor Ezeme, was at the events.