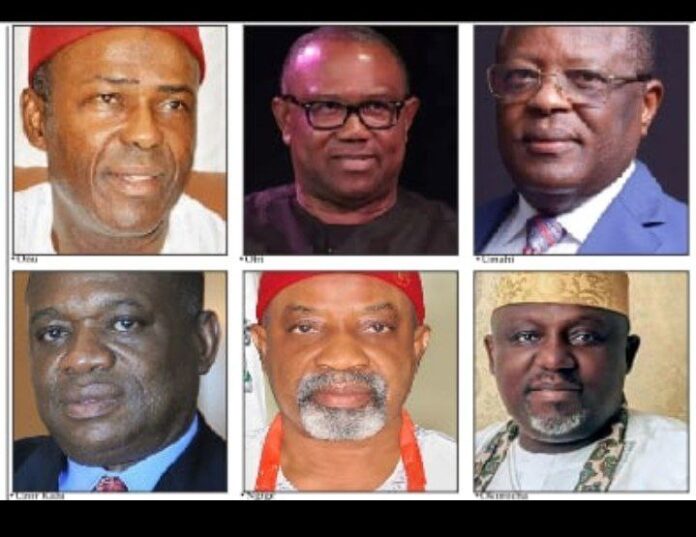 Southern Political leaders have been urged to resist the divisive tendency of any part of the country and unite for a South-East Presidency in 2023, Njenje Media News reports.

The leader of the Pan Yoruba group, Afenifere Pa Ayo Adebanjo sent out a strong message in Abuja while speaking at the Greater Nigeria Conference organized by South-East leaders to sensitize and mobilize support for the region to get the Presidency of Nigeria in 2023.

Pa Adebanjo who was one of the guests at the well attended Conference said that for justice, equity and FairPlay, the next President of Nigeria should come from the South-East.

He called on Presidential aspirants from the other two regions in the South to withdraw for the South-East aspirants and warned them against falling into the trick of being used to create division to sustain infighting.

The leader of the Middle Belt forum, Dr Bitrus Pogus who delivered the keynote address at the conference summed up his speech urging the South-East to insist on their right and to refuse to listen to those who are saying that zoning does not matter because it does.

Seven Presidential aspirants from the two main political parties, the All Progressives Congress, APC and the Peoples Democratic Party, PDP from the South-East were introduced to the conference, namely: Peter Obi, Anyim Pius Anyim, Sam Ohuabunwa and Dr Anakwenze from PDP and Governor Dave Umahi, Dr Chris Ngige and Senator Rochas Okorocha of the ruling APC.

The Presidential aspirants each addressed the conference for three minutes with Obi stealing the show with the crowd shouting “this is our best”, “Nigeria needs Obi now”, “He can do for Nigeria what he did for Anambra State”, among others.

Obi told the conference that Nigeria has met all the indexes of a failed state but his mission is to stop the slide. He said he intended to do it by returning the country from being a sharing economy to a production economy and all so by making sure that the right people are in trusted with piloting the affairs of the country. In his words, “ Right political leadership is a prelude to right economic reforms. It is about time we got our political and economic development right to stop the movement to doom we currently undergoing in our dear country.”

Referencing the old days Pa  Adebanjo talked about in his speech, Obi pointing out that it was when Nigeria was producing, but that what the nation does now is sharing what other nations are producing.

Obi remarked that his Presidency will create wealth, empower and develop the youth by creating jobs and making them productive.

Speaking passionately on human resource development, Obi who regretted the ongoing strike among University teachers said that education under him, as he did in Anambra state, would be accorded the highest priority. Following the example of other developing countries, Obi said he had the template of how to pull Nigerians out of poverty.

Governor Umahi said that Nigeria needed an engineer like him to fix the country.

Minister of Health, Dr Chris Ngige said that the country needed a visionary leader like him.

Earlier the Chairman of the Greater Nigeria group who organized the conference, the former Governor of Enugu State, Dr Okwesilieze Nwodo, in his welcome address said the conference became necessary because of the need to showcase Presidential materials from the South-East who were the best for the job because in them were visionaries, competence and integrity all put together.

The well-attended conference held at the international conference Centre, Abuja was attended by political leaders drawn from across all regions of the country.