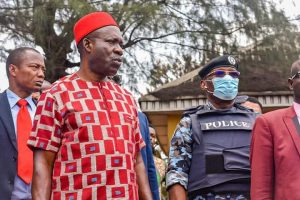 Chukwuma Soludo, governor of Anambra, says all the gunmen caught in the state so far are indigenes of the south-east. According to him, 100 percent of all the people that have been caught are Igbos and there is no one who has somebody invading from somewhere, it is 100 percent Igbos on Igbos and it has been discovered that a whole lot of the youths who have been taken to these bushes that got indoctrinated and initiated into all these kinds of things also happen to be citizens of Anambra state or indigenes of Anambra.

Soludo said this on Sunday when he featured on Sunday Politics, a programme on Channels Television.

Anambra, in recent months, has been targeted by gunmen who attack residents, security operatives and public infrastructure.

On September 11, the convoy of Ifeanyi Ubah, lawmaker representing Anambra south senatorial district, was attacked by gunmen at Nkwo Enugu Ukwu, in Njikoka LGA of Anambra.

Asked on the programme to comment on the identity of such attackers, who are often referred to as “unknown gunmen”, the governor said they are known.

“They are plain criminals, nothing else,” he said.

“It is lucrative criminality and idolatry. These are the two things that have come with it.

“Anambra is, without a doubt, the richest state in the south-east. So, this is the place where kidnapping has the highest value. So, you have the highest concentration here.

“They are not unknown gunmen. They are unknown to the extent that maybe they are not caught immediately in the act, but I can tell you that we have been catching quite a lot of them and they know that something is happening and that Anambra is not safe for them. Never again.

“Let me be clear about this. 100 percent of all the people that we have caught are Igbos. There is no one who has somebody invading from somewhere. It is 100 percent Igbos on Igbos.

” The first set of people we caught were 100 percent Igbos from other south-east states and none from Anambra.

“But as we went on, we then discovered that a whole lot of the youths who have been taken to these bushes that got indoctrinated and initiated into all these kinds of things also happen to be citizens of Anambra state or indigenes of Anambra.”

The governor also said his administration is doing everything possible, including using the “stick and carrot” approach, in tackling criminality in the state.

He said “relative peace” has returned to the state because his administration came into power “very determined” to eliminate criminals.

“Their camps are being decimated. It won’t be too long before we pin them down,” he said.

“Anambra has been quite relatively peaceful. We are pursuing this agenda. Compared to many other places in Nigeria, I’ll dare to say — if we are to have the statistics for the past three months — I think Anambra will compete favourably as one of the safest comparatively.”