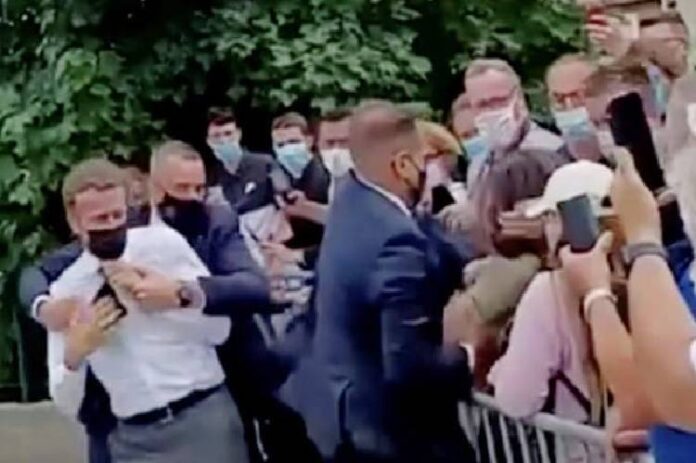 Damien was actually sentenced to 18 months in prison by the court with 14 of those months, suspended.

Mr. T attacked Macron while he was shaking hands with members of the public during a walkabout in France’s Drome region.

Video footage showed his security team instantly intervening and moving the leader away from his assailant.

According to TVC News, T claimed that he had considered tossing an egg or a cream pastry at Macron several days before his visit to the region. He did stress, though, that the slap was not deliberate.

T was charged with assaulting a public employee, which carries a potential sentence of three years in prison and a fine of 45,000 euros.

With less than a year until the next presidential election, the president was on a trip to the Drome region in the southeast to assess the country’s pulse in the aftermath of the pandemic.

T, along with a second man from his hometown of Saint-Vallier, was apprehended.

CNN, Al-Jazeera, New York Times And Other Major Media Websites Around The World Down By Unexplained Interference

Black Lives Matter Activist, Sasha Johnson In Critical Condition After Being Shot In The Head