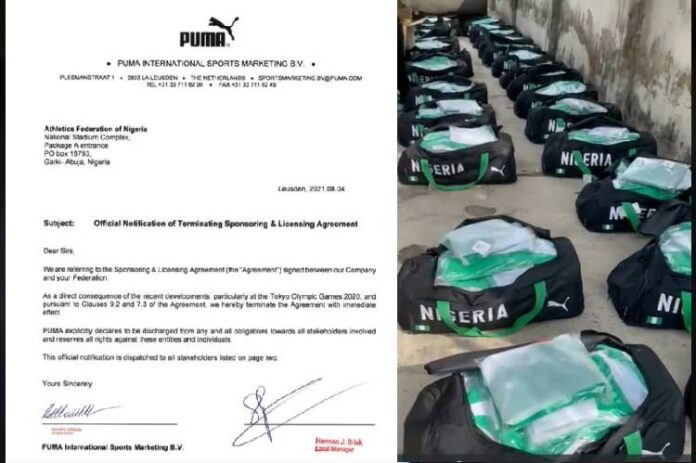 International fashion and sportswear brand, PUMA has terminated its agreement with Nigeria in the aftermath of a recent isssue in the ongoing Tokyo 2020 Olympic Games, Njenje Media News reports.

An athlete named Chukwuebuka Enekwechi posted a video of himself cleaning his Olympic Jersey on Instagram with the description “When you make the Olympic finals but only have one Jersey.” Nigeria became a trending topic for the wrong reasons.

The post went viral on social media, with many Nigerians wondering why an athlete would only be given one jersey.

According to reports, the Athletic Federation of Nigeria signed a contentious $2.7 million contract with Puma in Qatar in July 2019.

The agreement sparked a major crisis within the athletics body, dividing it into two factions. Gusau Ibrahim, the AFN’s leader, signed the agreement, which was set to expire in 2022.

The contract stated that PUMA will supply Nigeria’s Athletics team with free kits and outfits for the next four years.

“We are referring to the licensing and sponsoring agreement signed between our company and your federation.”

“As a direct consequence of the recent developments, particularly at the Tokyo Olympic Games 2020 and pursuant to clauses 9.2 and 7.3 of the Agreement, we hereby terminate the Agreement with immediate effect.”

“PUMA especially declares to be discharged from any or all obligations towards all stakeholders involved and reserves all rights against these entities and individuals”, the letter read in part.

[Video] God Has Turned Against You – Pastor Tunde Bakare Blasts...