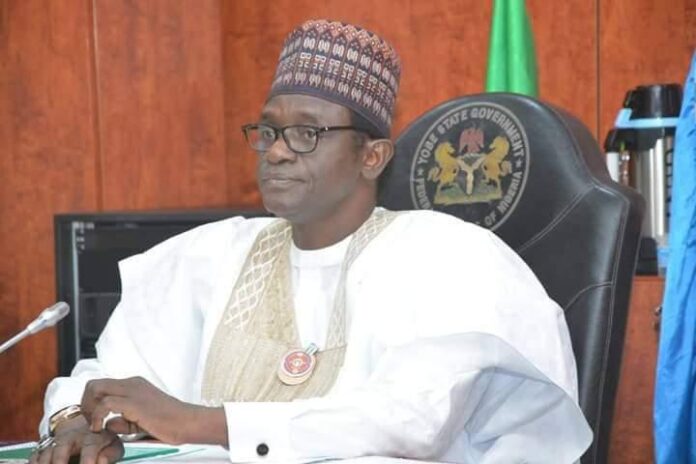 Governors of the All Progressives Congress APC have formally thrown their support for their counterpart in Yobe and National Chairman of the APC Caretaker Extraordinary Convention Planning Committee, Hon. Mai Mala Buni, Njenje Media News reports.

This is in regards to his appointment into such capacity by the National Executive Committee NEC of the party.

The governors made their position known in a statement issued Thursday in Abuja and signed by their chairman, Gov. Abubakar Atiku Bagudu of Kebbi state.

Vanguard learned that the governors arrived at the decision to support Buni after series of consultations among themselves and other stakeholders.

On July 28 2021, the Supreme Court had pronounced its split decision on the appeal and counter appeals before it in the judgment of Ondo Gubernatorial Election petition.

Prior to the release of the written judgment, the governors said a lot of analysis and interpretations had been made, with some clearly mischievous.

Part of the statement reads; “We thank the Supreme Court for this landmark judgement, which among others have dealt conclusively with legality of the APC Caretaker and Extraordinary Convention Planning Committee, its composition and all its decisions. The Supreme Court upheld the finding of the Court of Appeal that the National Caretaker and Extraordinary Convention Planning Committee ‘was set up to act on behalf of the National Executive Committee to temporarily carry out the function of the National Working Committee until new members were democratically elected.’

“The Supreme Court upheld further the ruling of the Court of Appeal that “it is evident that the said Governor Mai Mala Buni was appointed only in an acting capacity on a temporary basis to temporarily carry out and fill in the seat of the National Chairman of the party pending the elections of new members.” The holding of the Court of Appeal was not appealed against by the appellants i.e. Eyitayo Jegede S.A.N, Gubernatorial Candidate of the PDP in the last election in Ondo State and the Peoples Democratic Party. According to the Supreme Court ‘by not appealing against this holding, the parties herein accept it as correct, conclusive and binding upon them.’

“Governor Mai Mala Buni was appointed in acting capacity, on a temporary basis to temporarily carry out and fill in the seat of the National Chairman of the party pending the election of new National Chairman. This has settled conclusively that the APC National Caretaker and Extraordinary Convention Planning Committee and its composition is not in conflict with the Constitution of the Federal Republic of Nigeria and is consistent with provisions of the Constitution of the APC.

“We congratulate all Nigerians, in particular APC members and supporters across the country. We celebrate this landmark judgment together with all APC leaders, especially President Muhammadu Buhari whose zeal to bequeath a democratic party built bottom up for the benefit of Nigerians. We congratulate our colleague, His Excellency Rotimi Akeredolu S.A.N. for the reaffirmation of his electoral victory, which has now ended all electoral disputes around the Ondo State 2020 Governorship elections.

“We equally extend our appreciations to the APC National Caretaker and Extraordinary Convention Planning Committee under the able leadership of Governor Mai Mala Buni for the commendable management of the affairs of the party, which has minimise distractions from the task of rebuilding the party. Under the Committee, the Party has continued to be strengthened and attract more Nigerians.

“Most recently, reports of July 31, 2021, Ward Congresses from all parts of the country has demonstrated once more the commitment of party leaders and members at all levels to the process of rebuilding the APC. The congresses were highly successful.

“We appeal to all members and supporters at all levels to remain resolute and continue to support all initiatives of the APC Caretaker Committee under the leadership of Governor Mai Mala Buni”.

Secession Agitations By Nigerians Should Be Your Wake Up Call...