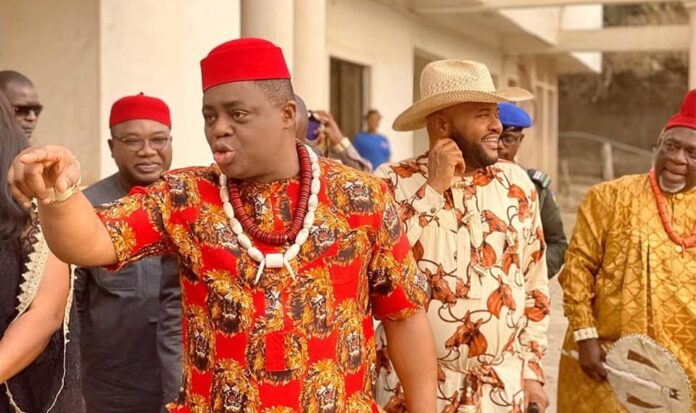 Osakwe, was arrested on Sunday after returning from church whisked away by policemen and taken to the State Criminal Investigation Department and was allegedly forced to make statements before being given a stringent bail condition.

Njenje Media News recalls that Osakwe had in February accused Fani-Kayode of arresting him at different times in 2019 while refusing to pay for his labour.

Along with seven others, the carpenter had visited The PUNCH office in Abuja last month, where they accused the former minister of assault, arbitrary arrest, and sexual harassment.

The former domestic servants had also accused the police of detaining them at different times at the instance of Fani-Kayode.

They had also deposed to affidavits and made copies available to The PUNCH. However, rather than respond to the allegations when contacted by the newspaper, Fani-Kayode quickly wrote a petition to the Commissioner of Police in Abuja, Bala Ciroma, accusing them of criminal defamation.

Osakwe had told The PUNCH, “Chief Fani-Kayode asked me to come to make repairs sometimes in 2019 at his house. I spent N15,000 to repair the expeller. I also spent N42,000 to fix a toilet seat. I was not given the money in return; neither was my labour paid for.

“Anytime I ask Chief Fani-Kayode for my money, he threatens me. I endured all these because his wife, Precious, was the one who brought me. Chief Fani-Kayode locked up an apprentice who had come to fix tinted glass at his house’s balcony.

The officer in charge of the case, CSP James Idachaba, who is also Head of the legal department, told The PUNCH that Fani-Kayode’s ex-workers investigation was sequel to order the CP.

Idachaba had said the staff were not compelled to change their statements but were only being investigated for criminal defamation.

The Spokesperson for the FCT command, Mariam Yusuf, when contacted on Tuesday, said she had no comment on the matter since Idachaba had already confirmed to The PUNCH that the domestic staff were being investigated.

“I have no comment if CSP Idachaba has already spoken on the matter,” she said.

Amended Electoral Act To Allow For Electronic Transmission Of Results –...