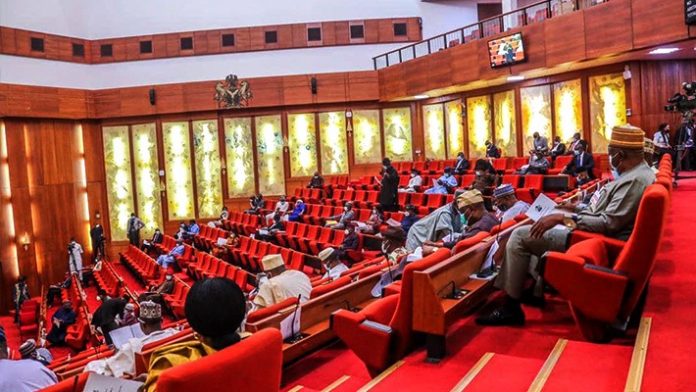 Nigerian senators appear to be divided over the validity or otherwise of the CBN ban on cryptocurrency transactions between Nigerian banks, Njenje Media News reports.

At the Senate plenary on Thursday, Senator Tokunbo Abiru, a former bank chief executive from Lagos, says he does not see the ban as the solution to the highlighted threats but suggested a public hearing be held with stakeholders.

“The last five years, we have had people changing crypto-currencies to over 500 million dollars. It is good to ban because of the challenges it has presented; in reality, banning it doesn’t take it away,” Mr. Abiru said.

“Even our Security Exchange Commission (SEC) also recognised crypto-currency as a financial asset they need to regulate. What we should do is to invite the major stakeholders to a public hearing.”

Adding his voice, Senator Solomon Adeola (Lagos West) opined that rather than the outright ban on crypto-currency by the banks regulator, regulation of the market would be a better option.

In his words: “I am strongly against the outright ban of this medium of exchange by the Central Bank of Nigeria(CBN). What the CBN should be telling Nigerians are the regulations put in place to regulate the activities of the operators.”

“All over the world, these cryptocurrencies are regulated. The operators of this so-called currency are everywhere. I would indulge this senate to allow the regulators also to be invited so that they can also tell the committees their own position concerning the operation of cryptocurrency in Nigeria,” Mr. Adeola concluded.

Senator Biodun Olujimi, apparently against the ban, noted that the youth have gained so much from the business of bitcoin, hence, advised the CBN and the government to iron out ways for cryptocurrency to work for the country while also taking step to prevent fraudulent people from gaining access.

Ms. Olujimi said, “We didn’t create cryptocurrency and so we cannot kill it and cannot refuse to ensure it works for us. These children are doing great business with it and they are getting results and Nigeria cannot immune itself from this sort of business.”

“What we can do is to ensure bad people must not use it. This motion is most important to us. The time has come for us to harmonise all the issues concerning cryptocurrency,” the senator added.

However, in a swift opposition, Senator Sani Musa (Niger) believes the directive is necessary due to the clandestine nature of the medium of transaction which makes it almost impossible to regulate while seeing it as a threat to Nigeria’s weak economy and the fragile Naira.

“Cryptocurrency has become a worldwide transaction of which you cannot even identify who owns what. The technology is so strong that I don’t see the kind of regulation that we can do. Bitcoin has made our currency almost useless or valueless,” Mr. Sani lamented.

In addition, he said: “If we have an economy that is very weak, and cannot regulate cryptocurrency in Nigeria, then I don’t know how our economy would be in the next seven years.”

The senate hierarchy implored its committees on banking, insurance and other financial institutions, ICT and cybercrime, and capital market to invite the CBN governor to explain the threats of cryptocurrency on the nation’s economy and security and to report back findings within two weeks.

Njenje Media News recalls that the Central Bank of Nigeria had recently ordered banks in Nigeria to deactivate all accounts by it’s customers that are being used for crypto trading.

The decision generated backlash from the public but the CBN defended it’s decision by claiming that fraudulent transactions are being done through cryptocurrency transactions and that it could be used to fund terrorism.