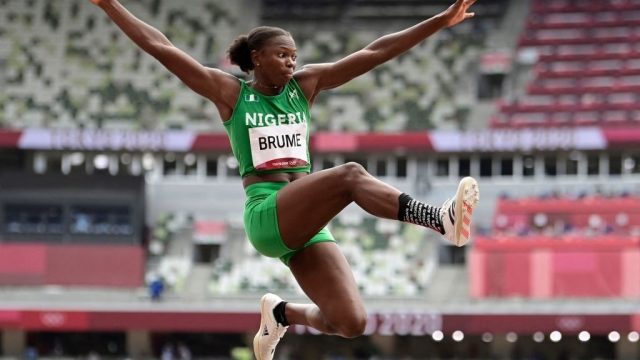 Ese Brume has dedicated her Bronze medal victory at the ongoing Tokyo 2020 Olympic Games in Japan to Bishop David Oyedepo of the Living Faith Church and the 10 Nigerian athletes that were disqualified from competing at the Games, Njenje Media News reports.

Brume in the early hours of Tuesday leaped 6.97 metres with her very first jump to claim bronze behind second-placed Brittany Reece of the United States and gold medalist Malaika in the Women’s Long Jump event.

Speaking to Nigerian journalists at the mixed zone of the Olympic Stadium Tokyo, a visibly excited Brume but in tears of joy while covering herself with the Nigerian flag said she dedicated her first Olympic medal to God, Bishop Oyedepo, 10 Nigerian athletes were in Tokyo but could not compete, her coach Kayode Gaya and family.

“I’m excited and grateful to God. I’m super happy that I was able to make the top three.

“I’ll say I’m not the best athlete but I’m grateful to God for bringing this far. I can’t contain my joy no matter the colour of the medal.

“It has been a great season for me right from April when I was injured but I never settled for less no matter the challenges. I keep on pushing and my coach keeps telling me that Ese you can do it. It is not all about the training but the faith I have in God,” Brume said.

Brume breezed through the qualification round on Sunday as her leap of 6.76 m automatically qualified her for Tuesday’s final.

After an exciting competition during which the lead changed hands frequently between Reese and Brume, Mihambo, who was placed third going into the final round, settled the deal with her last leap of 7.00m to move from bronze into gold position.

Messi is the greatest footballer I have played against – Ronaldo confesses