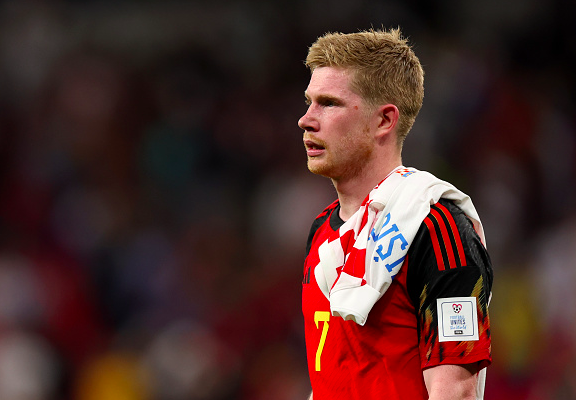 While the likes of seven-time Ballon d’Or winner Lionel Messi might have enjoyed a real World Cup romp in Qatar this year, there have been some notable heavyweight collapses in the Middle East, Njenje Media News reports.

With European giants Spain shockingly crashing out of the World Cup’s first winter tournament following an infamous penalties defeat against Morocco, La Roja joins what has been a blockbuster list of early departures.

Joining the likes of Germany, Belgium and Uruguay who have headed home without making a knockout stage appearance, there have also been some superstar players who really failed to make any kind of impact on the world stage.

On a list that includes some of Europe’s most notable and influential stars, we have taken a glance at a handful of heavyweight names who endured a group stage nightmare in Qatar.

While Belgium might have traveled to the Middle East last month ranked second in the FIFA standings, the Red Devils have come under real scrutiny following a woeful group stage run.

However, while the likes of Eden Hazard and Romelu Lukaku might have failed to make any kind of impact this winter, it will be Kevin De Bruyne who leaves Qatar with the most critics.

Although the Manchester City ace might have continued to impress while on Premier League duties this season after forming a stellar relationship with Erling Haaland, the one-time Chelsea starlet was far from his best this year.

Stating prior to Belgium’s shock group stage exit that he did not believe that Belgium’s current crop was in any condition to claim a maiden world crown, De Bruyne does find some real international pressure on his shoulders.

With the Red Devils bagging just a single World Cup strike this year, the 31-year-old was undoubtedly one of this winter’s biggest underperformers.

Suffering real World Cup heartbreak on December 2nd as they watched South Korea snatch a silver medal finish in Group H from under their noses, it is no secret that Uruguay find themselves at the heart of a real crossroads.

Although the South American giants might have made the trip out to Qatar with both Edinson Cavani and Luis Suarez in their squad, much of the focus was on Liverpool’s new record-signing.

Completing what was a blockbuster move to Anfield last summer in a deal worth £85million, Darwin Nunez was handed a golden chance to make a major statement on the world stage.

However, still failing to find his feet in Diego Alonso’s system, the former Benfica talisman only completed 90 minutes in just one of Uruguay’s three Group H appearances.

Leaving Qatar without a single goal or assist to his name and failing to offer La Celeste any kind of clinical edge, it appears that Nunez’s lofty price tag is weighing on his shoulders.

Shockingly crashing out at the group stage in Russia four years ago, Germany opened this winter’s tournament with their sights set on proving that they’re still one of world football’s elite.

However, suffering another public collapse and missing out on a knockout stage spot via their goal difference, the European giants have seen a host of their aging superstars come under public scrutiny.

While there might be real questions over what the future has in store for the likes of Manuel Neuer, it will be another Bayern Munich superstar who is most disappointed with his contribution this winter.

With former Chelsea striker Timo Werner picking up an ankle injury last month and ruled out of the World Cup’s first winter tournament, it was Thomas Muller who knew that he had to lead Germany’s charge.

Heading into this year’s tournament after missing each of Bayern’s final five appearances due to a knock, the 33-year-old appears almost certain to have played his final game on the world stage.

Ending their 64-year exile from the world stage thanks to their famous 1-0 victory against Ukraine back in June, Wales certainly found the mood in their camp at a red-hot high as they traveled out to the Middle East.

However, while some in Rob Page’s camp might have been dreaming of booking their first knockout stage ticket, the Dragons endured a real Group B nightmare after just getting a single point on the board.

Signing off their World Cup adventure with a 3-0 drumming at the hands of British rivals England on November 29th, Wales’ hopes had largely been based on Gareth Bale and Aaron Ramsey spearheading their charge.

Although both of Page’s icons might have previously cemented their spot in Welsh folk law, neither failed to roll back the years as they certainly showed glaring signs of their age.

With both Bale and Ramsey appearing as shadows of the players that once lit up the European stage, there will now be plenty of questions about their international futures.