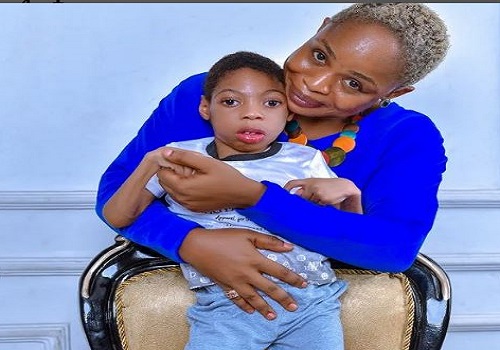 Afro R&B singer Jodie has said strangers advised her to kill her only child, who suffers from cerebral palsy.

She featured the boy in the video for her hit 2010 song “Kuchi Kuchi”.

Jodie made her appeal in a post on her Instagram page titled: “An Open Letter To Nigerians.”

She chronicled how hard she had toiled to raise funds to take care of him, including hawking goods across Lagos, begging and borrowing, until she had become overwhelmed by debts.

She fingered an unnamed hospital where her son was born for part of the blame for her condition.

The letters reads: “AN OPEN LETTER (Pardon) This message is not for the Kings, Queens or Men and Women of substance of Nigeria. This message is for the sons, daughters, servants, security agents, concubines….ANYBODY whom the Kings and Queens have a soft spot for their opinions.

“I would have paid a media crew, to make a compelling and attractive video, but, please forgive me… I cannot afford it now.

“I am not a lazy person. I sang a song, “Kuchi Kuchi” in 2010, which Kings and Queens have listened to and enjoyed. I am using the soft spot that song may have created to make this appeal.

“In the past six years, I have hawked beaded jewellery in offices like Total, Noah’s Ark, DDB etc. I have sold hair care products. I have begged. I have borrowed. Nigerians are kind. Even Bellanaija has sent me 100k… I have been a beneficiary of Air Peace’s Thursday session with the Chairman as a social responsibility to help the less privileged – SEVERAL TIMES.

“The truth is, I am a NOBODY, but I was inspired, years ago to sing a song even when I didn’t know myself – a song that still resonates till date. Who knows? Maybe the essence of Kuchi Kuchi was not for my popularity, but to respond to the silent cries of mothers who gave birth to special needs children.

“Maybe its essence was to speak for the blood of the special needs children that has been spilled IN SECRET by helpless mothers who did not know what else to do.”

She lamented that caring for her son had drained her finances and left her penniless.

Jodie added: “I know this, because some strangers have advised me to kill or abandon my son, because such children are sent to swallow up finances. My finances have been swallowed. My friends have abandoned me, because I am a beggar. My debts are new every morning. But I am a mother who would rather DIE first before her son does not eat.

“In my case, the hospital I delivered my son had a hand in it. I blame myself for not going to a general hospital. It is past. There is nothing I can do about it now.”