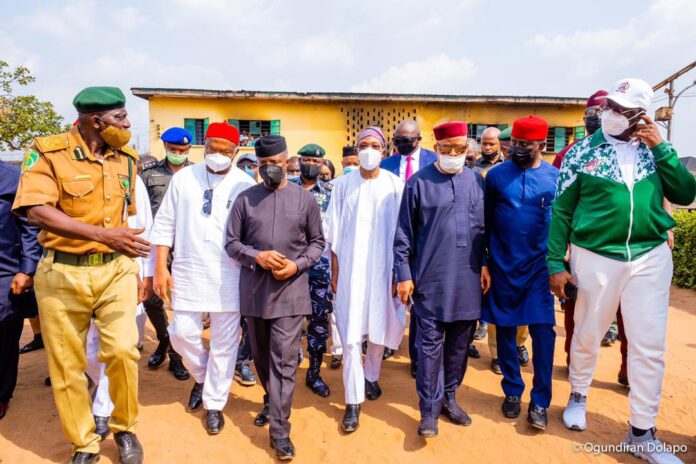 Vice President of Nigeria, Professor Yemi Osinbajo has assured Nigerians that the Federal Government would strengthen security at correctional centres across the country in the wake of the Imo state mayhem, Njenje Media news reports.

According to DAILY POST, Osinbajo gave the assurance while addressing newsmen at the Owerri Custodial Centre, Imo, on Tuesday after inspecting the facility to ascertain the extent of damage by hoodlums who attacked the centre on Monday, April 5, 2021.

The vice president who condemned the attacks on the correctional centre and the Police Headquarters in Owerri said the security architecture of the country would be rejigged.

He further assured that all those responsible for the attacks would be uncovered and made to face the full wrath of the law.

According to him, the attacks were against the Nigerian people and her government, adding that it must not be condoned.

“Perpetrators of this act will definitely be brought to book. They must not go free. They are cowards and will be discovered and duly prosecuted, he said.

“We will be rejigging the security architecture of the country and strengthening security at correctional centres nationwide,” he said.

Osinbajo, however, urged security agencies not to relent in the fight against banditry, irrespective of the challenges involved.