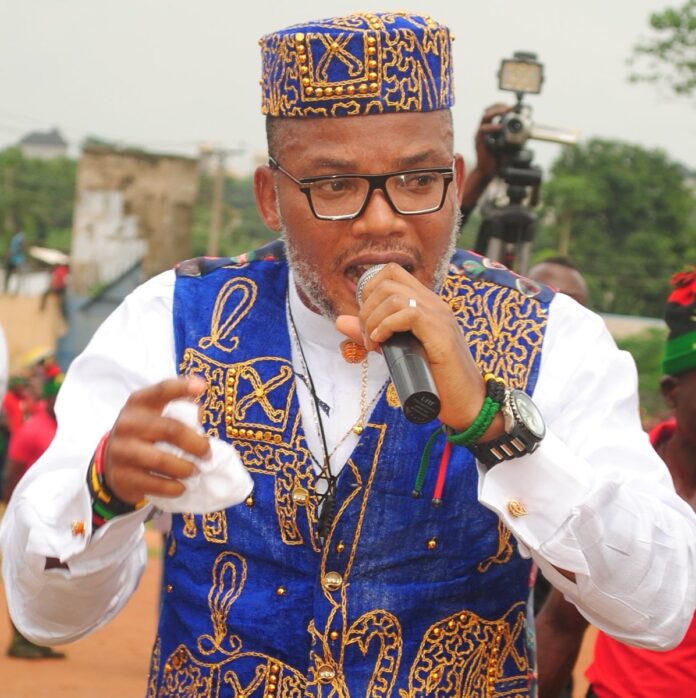 The Indigenous People of Biafra has declared Tuesday, September 13, as sit-at-home in the South-East.

The pro-Biafran group stated that the directive was in solidarity with its detained leader, Nnamdi Kanu, who will be appearing in court on that day.

They insisted that there shall be a total lockdown of the whole five states in the South-East for two reasons: Kanu’s court appearance and the visit of the President, Major General Muhammad Buhari to Owerri, Imo State.

In a statement on Saturday, the group’s Media and Publicity Secretary, Emma Powerful, said IPOB is simply implementing an existing order to lock down Biafraland any day its leader will appear in court at Abuja.

The statement read in part, “The global family and movement of the IPOB wishes to announce to the general public, especially Biafrans that Tuesday September 13, has been declared a day of civil action in the form of Sit-At-Home in Biafraland.

“The Tuesday’s civil action is very important for two reasons: First, our leader’s Appeal court hearing that was supposed to be on October 11 has been brought forward to September 13, 2022.

“As usual, we call on Biafrans and lovers of freedom to demonstrate our solidarity with our leader who is bearing our yoke in detention for over a year now.

“IPOB never issued a new directive to Biafrans, but is simply implementing an existing order to lock down Biafraland any day the our leader will appear in court at Abuja.

“It was based on such agreement with our leader that informed the suspension of the initial Mondays sit-at-home declared by IPOB leadership in August of 2021.It is imperative that our people understand this and go about their daily work and businesses on Monday and get prepared for Tuesday, September 13, 2022 because Biafraland will be locked down completely.

“Secondly, it has come to our knowledge that the Imo State Government has decided to invite President Muhammadu Buhari to Oweeri the Imo state capital Tuesday the 13th of September 2022 the very same day the leader of the Indigenous People of Biafra Mazi Nnamdi Kanu will be appearing in Court.

“There shall be a total lock down of the whole of Biafraland on Tuesday the 13th of September 2022. The Imposter Buhari cannot be coming to Imo State while he continues to detain our leader Mazi Nnamdi in the DSS custody.

“Kanu must be released unconditionally because he committed no crime known to law. We must warn women groups, the clergy men and women, traditional rulers, president-generals and others who may be contemplating going to Owerri on Tuesday to welcome Buhari.

“If you are in support of Buhari detaining our leader Mazi Nnamdi Kanu, then go to Owerri on Tuesday the 13th day of September and welcome the President.

“We, therefore, expect all markets, schools, banks, businesses and companies including police stations in Biafra Land to be under lock and key on Tuesday, September 13, 2022 in solidarity with our Leader Mazi Nnamdi Kanu.

“Therefore, everyone in Biafran territory must adhere to this civil action in the form of sit-at home on Tuesday. Biafrans are not known to be cowards because we stand without fear before our enemies.”