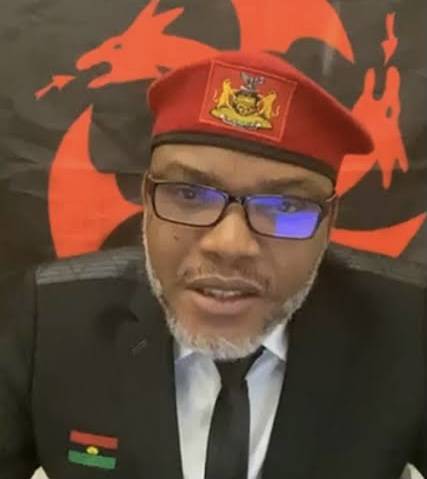 UPDATE ON OUR ROUTINE VISIT TO OUR INDEFATIGABLE CLIENT – ONYENDU MAZI NNAMDI KANU AT THE HEADQUARTERS OF THE DEPARTMENT OF SECURITY SERVICES (DSS) ABUJA, ON THE 21ST DAY OF MARCH, 2022.

Today, we visited Onyendu who is in the custody of the Department of Security Services, Abuja. Our interaction with him was quite fruitful and ended on a positive note.

Our discussion centred on two main things, namely, the frivolous criminal proceedings pending against him at the Federal High Court, Abuja, and the criminal destruction of the country home of Prof George Obiozor.

Onyendu remains firm and resolute in his convictions that his present experience is part of the sacrifice he is bound to make for the actualisation of his dream for the emancipation of UMUCHINEKE. He re-affirms the confidence he reposes in the legal team defending him at the Federal High Court, Abuja, ably led by Chief Mike Ozekhome, SAN, and prays that the Ruling that would be delivered on the 8th of April, 2022, on the Notice of Preliminary Objection, would end in his favour.
Onyendu also took sometime to express his anger and grave disapproval of the heinous act of destruction of the country home of the elder statesman and President General of Igbo socio-cultural group, Ohaneze Ndi Igbo, Prof George Obiozor. He describes the said destruction as cowardly and barbaric and condemns it in very strong terms. He further describes it as uncharitable, noting that the said elder statesman has been in the vanguard of behind-the- scene endeavours, discussions and negotiations, all aimed at exploring and implementing the option of a political solution, as a parallel way of ending the prevailing state of affairs.
He declares that the perpetrators of the heinous act shall not be forgiven and went ahead to direct that all persons who were in any way involved in committing the dastardly act be fished out forthwith.
He reminds UMUCHINEKE to be eternally conscious of several atrocities committed on our land by strangers whose primary objective is to destroy and plunder our land and then turn around to falsely accuse our people. He further notes that Prof Obiozor has been a commendable ally since his incarceration in June, 2021, and made the point that he is not an enemy of UMUCHINEKE. That being so, the elder statesman should be protected and encouraged for speaking up against the several multifaceted ills meted out both to him and to UMUCHINEKE as a whole. He further notes that the elder statesman has been instrumental in the regular presence which members of Ohaneze Ndi Igbo has shown in all the court appearances of Onyendu. This socio-cultural group has steadfastly and consistently made legal representation in the criminal proceedings pending against Onyendu at the Federal High Court Abuja. Onyendu remains appreciative and eternally grateful to that body for this commendable gesture.
Further, Onyendu points out that it was at the instance of Prof George Obiozor that a delegation of Igbo elders, led by a former Governor of Anambra State, His Excellency, Dr Chukwuemeka Ezeife, consistently showed visible presence in all his appearances in court and has gone ahead on several occasions to attempt to pay him a visit at the DSS headquarters, which attempts were frustrated by the personnel of DSS. Onyendu warns that our elder statesmen should be protected at all times and that the monsters desecrating Igbo land should be fished out wherever they are and severely punished, in order to serve as a deterrent to their ilks.
Onyendu further declares that IPOB remains a peaceful, non-violent self-determination group which completely detests and abhors any form of violence. He therefore urges UMUCHINEKE to continue to be law abiding and remain focused on the objective of the group.He urges his followers to shun violence and remain peaceful in their agitation for a permanent liberation of UMUCHINEKE from the shackles of bondage and stranglehold of underdevelopment that have held them from attaining their fullest potentials as special creatures of ChukwuOkikeAbiama.

Onyendu remains grateful to millions of his teeming fans and supporters for their steadfastness and unwavering resolve to achieve their objective.
He urges millions of UMUCHINEKE to come out and contribute efforts in clearing the debris in the burnt country home of Prof George Obiozor any time he indicates interest in commencing work. Onyendu further calls on people of good conscience and well to do UMUCHINEKE to assist the elder statesman rebuild his country home whenever he expresses the desire to do so.
Finally, Onyendu urges UMUCHINEKE throughout the world to pray fervently and ceaselessly for him even as the adjourned date for his next court appearance draws near.
Thank you, UMUCHINEKE and remain blessed.