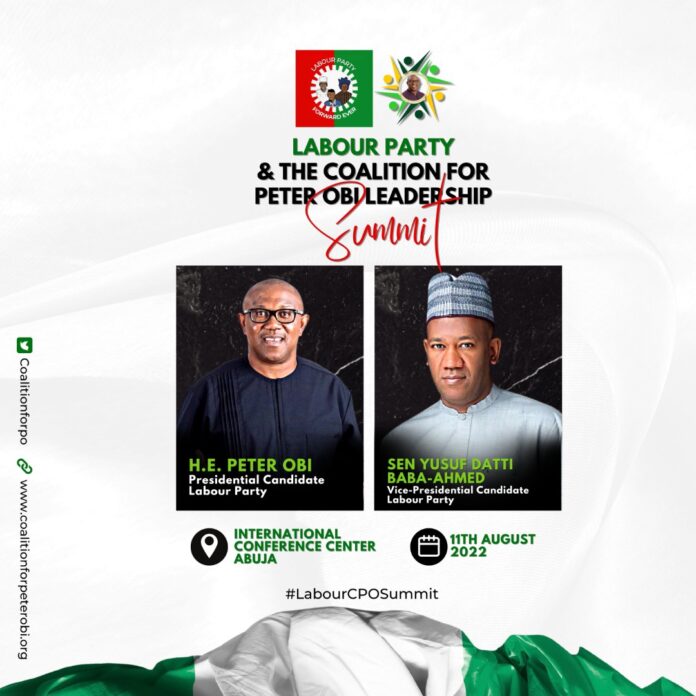 The presidential candidate of Labour Party, Mr Peter Obi and his running mate, Senator Yusuf Datti Baba-Ahmed will Thursday deliver lectures at a meeting between the leadership of the Labour Party, Candidates and a coalition of 64 Support Groups.

The event which is organized by the Labour Party and the Coalition for Peter Obi is themed, “Youth, Governances and New Nigeria” and will take place at the International Conference Centre Abuja, on Thursday, 11 July 2022.

In a statement issued and signed by Marcel Ngogbehei, Chairman of Coalition for Peter Obi (CPO) the organisers said programmes lined up at the event will give orientation about the agenda of Peter Obi for a new Nigeria.

The statement reads, “Our presidential candidate, Mr Peter Obi and his running mate, Alhaji Yusuf Datti Baba- Ahmed will on Thursday, August 11, deliver a lecture to sensitize all the candidates of Labour party and support groups about the agenda of the Presidential candidate for the ‘New Nigeria ‘.

“It will be a leadership programme that will emphasize how the Presidential candidate and his running mate will bring solutions to the various problem facing the country and how the candidates and support groups can partner to ensure a rebirth of the country from insecurity and economic backwardness.

“Others expected to deliver lectures at the event are former Special Adviser to President, Dr. Doyin Okupe and the National Chairman of Labour Party, Comrade Julius Abure Esq.”