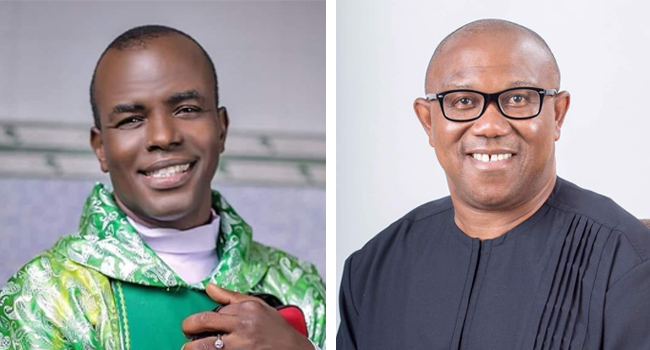 It was in 2002 that Mbaka first unraveled. That year, he would gather his congregation at the Adoration Ministry and ask everyone to start pointing at the Lion building (Enugu govt house) while commanding Holy Ghost fire against the then governor Chimaroke Nnamani whom he said was a wicked Governor who God already told him would not live beyond that year not to talk of winning the 2003 re-election. This man didn’t just stop at this weekly harvest of Holy Ghost fire against the governor, he actually went a step further to release a special audio tape titled “This Wicked Generation” in which he swore that if Chimaroke won his 2003 reelection bid, he (Mbaka) would know he was not serving a living God and would therefore resign as a Priest.

2003 election came and governor Chimaroke won his re-election, finished his second term and even contested and won another election as a Senator. As I type, Chimaroke is currently in the senate TWENTY YEARS after. And he just secured another ticket to go to the Senate again in 2023 and is set to be the Enugu state governor come 2023 BY PROXY.

Mbaka neither resigned as he swore he would nor did he even apologize for ly!ng in God’s name.

This is Mbaka for you. A religi0us P0nzi Master who praises anyone who gives him money even if that person k!lled a million innocent people to make that money. And once you refuse to give him money, you become an enemy. Recall how he lamented that the presidency no longer picks his call which was exactly why he started attacking the same Buhari whom he was praising in 2019 at a time it was obvious that his govt has been a disaster.

RELATED POSTS:  I Wish I Did What Buhari Did On Twitter -- Donald Trump Backs Ban

If you know Mbaka so well, you won’t wonder why he said a man who throws money around, even if it is stolen public fund, is better for Nigeria of today than another man who refuses to PUBLICLY announce his donation to the church even when doing so would have earned him some political capital but instead, requested to be taken to the project site, that he could even singlehandedly execute the project for the church. And this same man went and donated N100,000000 to Bishop Shanaham Specialist Hospital Nsukka (BSSHN) to upgrade its School of Nursing and Midwifery to a College. BSSHN is a missionary hospital owned and managed by Nsukka Catholic Diocese.

Between PUBLICLY giving money to Mbaka, without seeing any project for which he intends to use the money, And donating a whopping N100,000000 to upgrade an academic HEALTH institution owned by the church, WHICH ONE SERVES HUMANITY AND GOD BETTER????

I’m happy that Nigerians are waking up. Integrrity-challenged morally bankrupt cr00ks can no longer continue to hold us hostage simply because they are wearing a white cassock.

My only disappointment is with the mother church for refusing to wield the big stick on this charrlatan. How can one emotionally truncated man hold the mother church hostage in this manner? I grew up as an Alter Boy at Sacred Heart Parish Akpugo and I know one or two things about the level of Organisational Discipline in the Catholic church. Mbaka is successfully making n0nsense of all that while my Lord Bishop watches on. A shame, isn’t it?